The Importance of Computers in Communication

Computers are critical for communication and are the centerpiece of information technology. The early 1990s saw the emergence of household Internet use, which eventually spurred common use of email, websites, blogs, social networking, video chat and Voice-Over-Internet Protocol. Today, many traditional communication modes including postal mail and landline phones seem obsolete. 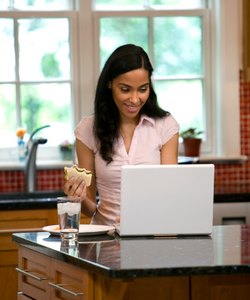 Computers are instrumental in communication.

The World Wide Web, Internet and email revolutionized the way individuals communicate with each other. Rather than waiting days or weeks to see information, we can now view all information at the speed of light. Email has fundamentally transformed how people share information and conduct business based on the speed and flexibility it offers. Computers can process data at approximately 20 million bytes per second so it is easy for them to download and instantly display almost any text email.

Voice-Over-Internet Protocol -- or VOIP -- replaced the need for landline telephones in many instances. These lines can provide instant phone communication over the Internet, and often are cheaper than fixed phone lines. They also provide the ability to conduct video chats to see whom you are speaking with. VOIP platforms also store contact details for easy accessibility and dialing. The current drawback to VOIP, as of May 2011, is that 911 operators cannot trace the call back to the location.

Social networking sites including Facebook, Twitter and LinkedIn allow users to rapidly generate content for people in their network to view. Rather than sending individual notes, social networking provides a constant stream of updates and information. These computer tools have taken communication a step further than email due to their ability to instantly communicate life and status updates to an entire network of people who can respond and comment to such notes in real time. Unlike email's distribution lists -- which essentially could transfer the same information to large groups of people -- social networking's streamlined and user-friendly interface precludes information overload that occurs from attempting the same functions in an email program.

While it not a personal computer, routers are types of computers used to direct communication traffic. They are crucial to the efficient and correct distribution of calls, emails or other Internet traffic. Routers take "packets" of electronic data and send them in the direction to connect with the intended person. They can be used in the home but are also held in central data warehouses where hubs of traffic are routed in the same place.

Around The Home
Productivity
By: Brian Jung

Around The Home
Productivity
By: Ben Lingenfelter

How to Copy, Cut and Paste in Word

Around The Home
Productivity
By: Michelle Varsallona

How to Convert Email to a Phone Text Message