The Advantages and Disadvantages of RISC

While a computer processor is fast and accurate, it can usually only carry out one task at a time. One of the big challenges for any computer system is working out the most efficient order to carry out tasks. Reduced instruction set computing, or RISC, is a strategy for deciding this order, a bit like a human having a system for managing a to-do list. RISC can also stand for reduced instruction set computer: that is, a computer that operates its processor using the RISC strategy. 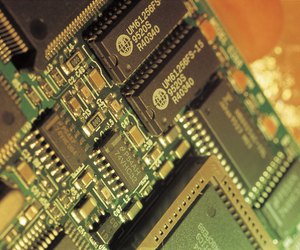 The Reason For RISC

IBM researched the efficiency problem in the 1970s. In 1974 John Cocke discovered that 20 percent of the instructions issued to a processor were responsible for 80 percent of the work it did. That 20/80 ratio is common in many different situations, not just computing, and is known as the Pareto Principle. IBM began developing a new architecture, which is the basic set of rules of how the parts of a computer interact, to take advantage of Cocke's discovery and make more efficient use of instructions. It released its first computer using the RISC principles in 1980.

RISC is more of a general approach to computing than a specific set of rules, so different RISC-based processors and systems will work in different ways. RISC systems often use a particular approach to registers, which are temporary storage space on the processor for even quicker access than getting data from a computer's memory; RISC-based processors use general purpose registers rather than assigning them to specific types of data, meaning the processor can switch registers from task to task more efficiently. RISC systems will often ensures the computer always issues instructions in the same format, saving the processor work in interpreting exactly what is meant. Wherever possible, RISC-based processors try to carry out an exact number of instructions in each clock cycle, which is an electronically-generated time signal designed to keep a computer actions happening at a logical and synchronized pace.

Since the 1980s, RISC has become an almost universal approach to computing: today desktop computers, mobile tablets and smartphones, and even many supercomputers use processors based around the RISC principles. The term has become so popular that the approaches used before RISC have been retrospectively dubbed complex instruction set computing, or CISC. The terms are carefully chosen because RISC systems don't necessarily involve having fewer instructions than CISC; the difference is a narrower range of instructions, organized in a simpler way.

How to Calculate MIPS

Around The Home
Productivity
By: Athena Hessong

Differences Between SIMD and MIMD