A giant wall of picture and sound that bombards shoppers is how stores generally sell televisions. To compete in this environment, manufacturers ramp up the brightness and over-saturate the picture color. For use at home, you'll need to calibrate your television for everyday viewing. 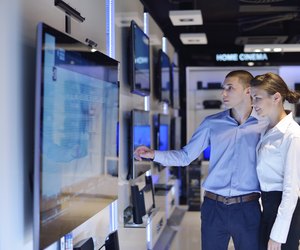 Choosing the right picture mode is critical to achieving the correct picture for each type of input. The most common picture mode settings are:

Dynamic or Vivid: This is for rooms that have an abundance of light. This setting over-enhances the image so it "pops" a bit more. If your television has a "Sports" picture mode, it's generally just Vivid with slight alterations. While this makes the grass greener, all it's really doing is enhancing the color palette and increasing the brightness. The drawbacks to this mode are that it results in loss of detail, and staring at a too-bright screen for hours can hurt the eyes.

Standard: This mode is not as accurate as Movie mode nor as vibrant as Dynamic. It has moderate brightness for daytime and nighttime viewing and performs decently for pretty much any type of television program. Generally, set your cable or satellite input to this if you just want to "set it and forget it."

Movie or Cinema: Often the most accurate setting, this should be used for playing movies on your Blu-Ray or DVD player. It's meant for low-light viewing, and will give you the closest image that the director intended. Most people are unaccustomed to such an accurate image and as a result, the television might look dim.

To adjust the contrast of a picture is actually to adjust its white levels. Adjusting the contrast too much causes a white out effect and over saturates the picture. On a properly adjusted display, white objects on the screen should pop but still have an adequate level of detail.

Sharpness is generally a setting that needs little adjustment, since most high-definition images already have excellent sharpness. If you happen to see that the straight lines on a gridiron have jagged edges, this could be a sign that your sharpness settings need adjustment.

Tint rarely needs adjustment and should generally be ignored for calibration purposes.

Color is perhaps the hardest setting to get right manually. How green should that tree be, or how red that race car? Most high-end televisions come with excellent color accuracy, but lower quality televisions need adjustment. To properly calibrate color on a lower end model, experts recommend using a professional calibration disc.

After purchasing a new television, start with the manual or "eye-ball" calibration first. To reach the optimum settings, use a professional calibration disc. These discs use specific patterns and clear instructions to eliminate the guess work usually present in calibration. Many discs are available, but one of the most accessible is Disney WOW: World of Wonder Blu-ray disc.

How Can I Change the Color on My Sanyo TV?

How to Calibrate a Samsung HDTV

The Best Picture Setting for an Emerson TV

Why Did My Plasma TV Color Change?

How to Correct Vizio Color Problems

How to Remove an Orange Tint From a TV

Around The Home
Entertainment
By: Dave Johnson