The Best Way to Connect an HDMI TV to a VCR

Recent advancements in television technology have left many viewers in the dust. Fortunately, VHS users have not been forgotten. The advent of new high-definition programming, Blu-ray and digital media has caused many changes in the way TVs are built. When connecting older components, like a VCR, to a newer, HDMI-enabled TV, there are a few things to keep in mind, but it's not as complicated as it may seem. 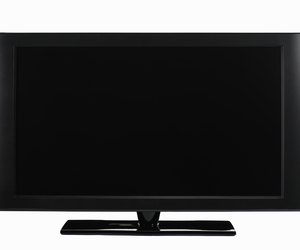 HDMI is a digital audio/video standard for home theater components. Although it does nothing for the VHS format and VCRs, most newer components like plasma and LCD TVs and DVD players have HDMI connections. Using one small cable, a digital audio and video signal is transferred between a TV and a receiver. This eliminates the need for an extra audio cable. HDMI also allows a large amount of data to be transferred, (much more than older, analog technology) so uncompressed, multi-channel audio and video streams can be preserved for the best possible picture and sound quality.

Just like any home theater video component like a DVD player or cable box, your VCR comes equipped with analog audio and video input and output jacks. These inputs are usually red, white and yellow and connect directly to your TV or to an audio/video switching device, like a receiver. These outputs, although a few years old, still offer acceptable image quality and hook to your HDMI-enabled TV quite easily.

Hooking up your VCR

While examining the back of your HDMI-equipped television, you'll notice analog inputs along with the HDMI inputs. Also note any s-video inputs. Now, match those inputs with those on the back of your VCR. Using a standard RCA audio/video cable, make the connection between your VCR's outputs and the TV's inputs. Be sure the match the red, white and yellow colors to the proper jacks. Alternatively, the s-video output can be used with an s-video cable for slightly higher-quality video, if your VCR has one. It is still necessary to use the red and white portion of the RCA cable to transfer the audio. Once your VCR is connected and powered on, it is simply a matter of tuning your television to the proper input channel to enjoy your favorite VHS movies.

How to Connect an Older VCR to Vizio HDTV

How to Connect a DVD Player to a Sanyo TV

Around The Home
Entertainment
By: Wolfram Donat

How do I Determine if My TV is HDMI?

Around The Home
Entertainment
By: Jason Hogue

What Is Analog Audio Output?

Around The Home
Entertainment
By: James Red

How to Play a DVD on a Television Set

Around The Home
Entertainment
By: Brenton Shields