"Globalization" is a contemporary buzzword for a theory that is frequently debated in the media, and in political and academic circles. One definition of the term is it represents the global domination of Western cultural and economic values, while others interpret it more benignly as a breaking down of cultural and economic borders. The Internet is seen by some socio-economic commentators as a major driving force in creating a unified global community. There are both positive and negative impacts of the Internet and globalization. 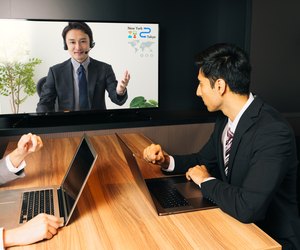 The Internet and Globalization

Without technology, globalization would probably not be a topic for discussion. In particular, communications technology, in which the Internet plays a major role, has revolutionized how people work, expanded the global knowledge base and provided a variety of ways of bringing people and cultures closer together. The Internet provides a platform where companies that are thousands of miles apart can communicate and share information. On a social and cultural level, the Internet provides access to the same music whether you are in Beijing, Boston or Beirut, and people can make new friends around the globe via social networking sites.

The Internet and globalization have radically changed the business world. It has enabled companies to improve their competitive edge and increased productivity, simply because of the speed of access to information, and of electronic transactions. It allows a company based in the United States to have a customer service call center in Bangalore, staffed by highly-trained staff but with lower wage costs. On the other hand, the growth in Internet use by businesses globally also opens up new job markets for U.S. IT professionals and engineers, whose expertise is sought outside the home market.

The Internet has altered the structure of the mass media. Most of the news networks were local or national prior to the Internet revolution, and only a few companies, such as CNN, broadcast in other countries. Now the news on all networks is available constantly, anywhere in the world, and it is updated as events occur. Some see the mass media aspect of Internet globalization as a negative, because it is claimed that English-speaking countries dominate the media, and this has popularized U.S. culture at the expense of local cultures.

Negative Impact of the Internet

The Effect of Electronic Communication

Around The Home
Productivity
By: VictoriaM

People of the Internet Are Obsessed With the Florida Man Challenge

Six Good Reasons Why the Internet Is Good

Around The Home
Productivity
By: Amanda Wells