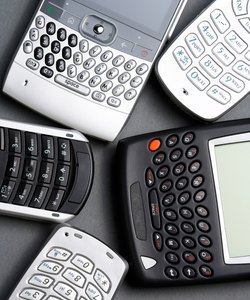 Open radio communication was one of the first wireless technologies to find widespread use, and it still serves a purpose today. Portable multichannel radios allow users to communicate over short distances, while citizen's band and maritime radios provide communication services for truckers and sailors. Ham radio enthusiasts share information and serve as emergency communication aids during disasters with their powerful amateur broadcasting equipment, and can even communicate digital data over the radio spectrum.

Cellular networks use encrypted radio links, modulated to allow many different users to communicate across a single frequency band. Because individual handsets lack significant broadcasting power, the system relies on a network of cellular towers, capable of triangulating the source of any signal and handing reception duties off to the most suitable antenna. Data transmission over cellular networks is possible, with modern 3G systems capable of speeds approaching that of wired DSL or cable connections. Cellular providers typically meter their service, charging customers by the minute for voice and by the megabyte for data.

Satellite communication is another wireless technology that has found widespread use in specialized situations. These devices communicate directly with orbiting satellites via a radio signal, allowing users to stay connected virtually anywhere on Earth. Portable satellite phones and modems feature more powerful broadcast and reception hardware than cellular devices due to the increased range, and are correspondingly more expensive. For semi-permanent or permanent installations, such as outfitting a ship for satellite communication, a more traditional communication system may link to a single satellite uplink, allowing multiple users to share the same broadcast equipment.

Wi-Fi is a form of low-power wireless communication used by computers and hand-held electronic devices. In a Wi-Fi setup, a wireless router serves as the communication hub, linking portable devices to a wired internet connection. These networks are extremely limited in range due to the low power of the transmissions, allowing users to connect only within close proximity to a router or signal repeater. Wi-Fi is common in home networking applications, allowing users to link devices without running lengths of cable, and in commercial applications where a business may provide wireless Internet access to their customers. Wi-Fi networks may be free to use, or their owners may secure them with passwords and access restrictions.

How Do I Get a FM Signal in a Steel Building?

Around The Home
Entertainment
By: Erik Johnson

Can Humidity Affect a Wi-Fi Signal?

Around The Home
Productivity
By: Kay Ireland

How to Put a 2Wire Into Bridge Mode