A technology first prototyped in the 1960s, virtual reality simulates a real or imagined physical event, such as a walk through the park, or on Mars. Modern VR typically produces artificial scenes in software and renders them as an immersive experience of sight and sound. VR hardware generates a realistic world in 3-D that changes in real time as you interact with it. Once only a subject of science fiction, VR has found many uses in education, entertainment, medicine and science. 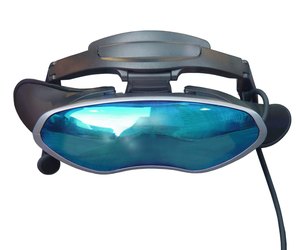 The hardware for virtual reality begins with a computer or console capable of high-speed graphics processing; high performance is essential to VR because generating realistic, moving scenery involves lots of math. To view the graphics, VR system users wear a special set of goggles or a closed, enveloping helmet that incorporates a wide-angle display. In addition to displaying imagery, the device tracks head movement; when you turn or tilt your head, you can see what's behind, above or below you in the virtual world. Other VR setups employ a wraparound screen in a small enclosed room or chamber in which you sit. In either case, the VR system creates a detailed visual panorama.

VR adds new dimensions of realism and engagement to computer games; the virtual world of the game surrounds you, allowing you to explore it and interact with the characters. The characters may be avatars -- graphical stand-ins -- used by other players or may be entirely fictional characters with computer-generated personalities. Many VR games handle movement and action with a traditional joystick or game controller.

People suffering from phobias and post-traumatic stress disorder have in some cases found relief through VR-based treatments; the system puts the patient in a series of progressively challenging emotional encounters, helping him gradually cope with anxiety-inducing situations. Also using VR, surgeons can explore and plan complex medical procedures by evaluating virtual patients created from CT scans.

Flight simulators are a classic use of virtual reality; the simulator is an enclosed room built on a mechanical platform that reproduces the motions encountered during flight. In the room, pilots manipulate realistic controls while responding to a variety of flying conditions. In much the same way, tractor-trailer and other commercial and construction truck drivers gain experience with truck simulators, improving safety and driver confidence.

Games to Play With Friends Online

Around The Home
Productivity
By: T.M. Wit

What is the Difference Between a Robot and a Machine?

Around The Home
Productivity
By: Frank Luger

How to Reset the Parrot Minikit

How Does a Motion Sensor Work?

Around The Home
Entertainment
By: Milton Kazmeyer