What Is a Locked iPhone? 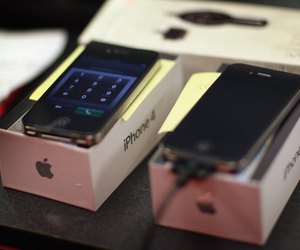 In general, a locked iPhone is restricted in some way.

One meaning of the term "locked iPhone" refers to an iPhone with a locked home screen. All iPhones have a "lock" feature that allows a user to lock his home screen when the phone is not in use to prevent him from accidentally activating the touch screen while the phone is in his pocket. When the phone is "locked," the screen also goes blank to conserve power. The user can set his phone to lock after a specified period of inactivity or do so manually by pressing the "lock" button located on the top of the device.

Another meaning of the term "locked iPhone" refers to an iPhone that can only be used by one carrier. As of March 2011, the only cell phone providers in the United States that the iPhone can be used with are Verizon and AT&T. Cell phone users on other networks, such as T-Mobile and Sprint, cannot use the iPhone with their network. Furthermore, the iPhone is "locked" to the specific network it is tied to; an AT&T iPhone user cannot use her AT&T iPhone on the Verizon network and vice versa.

The terms "locked iPhone" and "jailed iPhone" are often used interchangeably, though "jailed iPhone" is the proper term. A jailed iPhone is restricted to using the applications and operating system approved by Apple. A jailbroken iPhone, on the other hand, can use third-party applications, allows users to access its file contents and gives users the ability to customize the look of the iPhone's iOS operating system. Jailbreaking (unlocking) a jailed (locked) iPhone involves connecting the iPhone to a computer and using a jailbreaking program to allow for unsigned code to be used on the device.

As of March 2011, both unlocking your iPhone from a specific carrier and jailbreaking your iPhone are both legal. The Library of Congress made these processes legal through an amendment to the Digital Millennium Copyright Act in 2010. Users who choose to unlock their locked phones, however, run the risk of voiding their warranty with Apple, and Apple reserves the right to administer firmware updates that can disable unlocked or jailbroken phones.

How to Unlock a Disabled iPhone

Around The Home
Productivity
By: Jessica Brower

How to Reflash an iPhone

How to Turn off the Screen Rotation Lock on the iPhone