What Is Computer Hardware Servicing?

Computer hardware servicing refers to doing repairs and maintenance on the physical components of a computer and its peripherals, including fans, hard drives, keyboards and printers. It differs from software-related maintenance, which deals with the programs running on a computer, including eliminating malware, installing new software and updating programs for users, though some people are skilled at both. 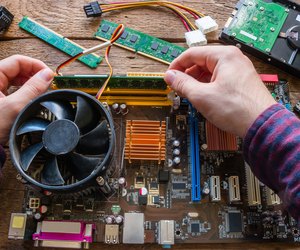 What Is Computer Hardware Servicing?

Ideally, a computer will go many years without needing physical maintenance, but that's not always the case. Moving components like hard drives, printers and cooling fans can break down over time, like any mechanical parts, and when they do, they'll need to be repaired or replaced. Batteries on laptops and tablets don't last forever and need to be replaced over time when they cease to hold a charge.

Other parts of a computer can fail as well, including microchips like the central processing unit, the graphics card or memory chips. Screens and monitors can deteriorate over time, and any part of a computer can be physically damaged by an accident or vandalism, necessitating repair or replacement.

Like anything else in a home or office, computers can also become dirty or dusty. Keyboards, mice and printers can be clogged with dust or grime, which can often be removed with a cotton swab or a puff of canned compressed air. Damage from spilled liquids can be harder to repair, though experts often know how to salvage as much as possible from a liquid-damaged machine. In general, hardware servicing is often best left to experts, although ambitious users can upgrade components in many computers including hard drives, memory and more.

Smart phones can require maintenance as well, especially to repair broken screens and other physical damage. Some businesses provide service for computers and for phones that are in need of physical hardware service, including repair and maintenance.

How Hardware and Software Intersect

It's often hard to do hardware servicing on a computing machine without knowing something about its software and vice versa. Program errors can be caused by faulty hardware, and malicious or buggy software can cause a computer to overheat, run down its battery or behave in other ways that are hard to distinguish from hardware problems.

Often, computer servicing involves both hardware and software. Technicians will check computers for viruses and malware, upgrade aging components, update software that doesn't automatically update itself and answer any questions from users about the machine's behavior.

What Is Computer Hardware Maintenance?

Around The Home
Productivity
By: Elizabeth Burns

How to Stop McAfee on Startup

Around The Home
Productivity
By: Emilio Alvarez

How to Clean a Lenovo Keyboard

How to Disable Avast on Startup