Can I Bring Home a LCD TV Laying Down?

There are five basic types of large screen TVs in existence today: direct-view (Tube), rear projection, LCD, plasma and LED. Of these, unless you are buying used, the first two are almost impossible to find. Technically, an LED TV is just a variation on the LCD models. That leaves you with LCD or plasma. There are pros and cons to both, one of which is transporting them laying down. 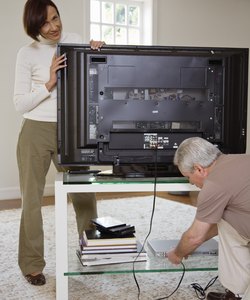 Care must be taken when transporting and installing any TV.
credit: Jupiterimages/Creatas/Getty Images

The battle has raged on LCD vs. plasma since their introduction about 10 years ago. Their differences are becoming less than their similarities, but they both have some pros and cons. These include viewing angle, burn-in, motion blur and power consumption. One major difference is how they can be transported.

What TVs Can’t Be Transported Laying Down?

All TVs are fragile electronic devices. Just like any other electronics, there are many components that need to be protected during shipping and storage. One of the main differences between LCD and plasma flat-screen TVs is the fact that plasma televisions have a glass screen. Most LCD screens are made of, or at least protected by a layer of, plastic. For this reason, plasma TVs are not supposed to be transported laying down.

Can I Bring Home an LCD TV Lying Down?

The short answer is yes, as long as care is taken to secure the television and reduce vibration. If the TV is in the original packaging, then proper support and padding are supplied. Check the manufacturer's instructions on the outside of the TV's original box for the best way to transport the unit.

What if I Don’t Have Original Packaging?

If you don't have the original packaging, you need to make sure that the screen is both protected and supported. Emulate what the original packaging would have looked like as much as possible. The front of the unit is flat and stable, so face it down. Put a thick blanket underneath the entire unit, with an extra layer of towels under the screen itself to keep it from flexing. Cover the entire TV with heavy rugs or blankets to keep it from bouncing, then use straps or packing tape to keep the entire unit from moving.

Around The Home
Entertainment
By: William McCoy

How to Safely Pack a Flat Panel TV for Moving

How to Remove the Base on a Toshiba TV

How to Remove a Samsung TV Stand

Around The Home
Entertainment
By: Larry Simmons

Why Can't You Lay an LCD TV Flat?

Around The Home
Entertainment
By: David Orr