Laptops are lightweight, portable computers. They are popular devices among businesspeople, students and people who use their computer on the go. They usually cost more than desktop computers for comparable specifications, due to their handy portability. They can have as much power and speed as desktops and they can be hooked to external monitors or keyboards, among other peripherals. They are more suited for use in classrooms, business meetings, planes, trains, etc. 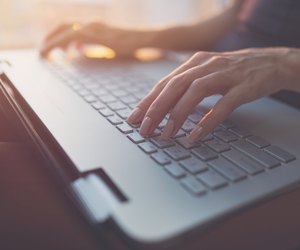 The laptop's misleading name comes from the fact that they are small and light enough to rest on a person's lap. A laptop should not sit directly on a person's lap. They should sit on a flat surface such as a desk or a cooling mat. Laptop fans need space to cool the machine. If the fans are blocked, the laptop may overheat and cause damage. Some overheated laptops may even burn you if placed directly on your skin.

The first portable computer that resembled laptops today came out in 1982, the GRID Compass. It was not widely used. The first successful laptop computer was the Japanese Kyocera Kyotronic 85, introduced in 1983. Laptop computers were not IBM compatible until 1986.

In the 1990s, with such companies as Dell, Apple and Gateway competing to make useful portable computers, laptop technology rapidly advanced. In 1995, Microsoft made the first of their Windows operating systems and streamlined the design of future laptops.

Manufacturers describe laptop screens in terms of dimension and resolution. The dimension of the laptop's screen dictates how large the machine itself will be. The larger the screen is, the larger the laptop (screens are measured diagonally). The number of pixels tells you the screen's resolution. More pixels mean a cleaner, sharper image. High resolution often means a larger screen.

Laptop screens also come in anti-glare and glossy. Anti-glare is good for use in heavily lighted areas such as office buildings, airports and schools. Glossy is good if you use your laptop more for media than business.

Most laptops these days run on lithium-based batteries. Lithium-ion batteries have an average lifespan of 2 to 3 years when used regularly. They will slowly lose their charge capacity over that period. Factors such as storage temperature and average charge can lengthen or shorten a laptop battery's life. Keep lithium-ion batteries in cool temperatures whenever possible. If you must store it for a prolonged period, store it in a cool environment and with a 40 percent charge.

As of 2006, only 3 percent of lost or stolen laptops were recovered by their owners. More than 50 percent of corporate crimes have a connection with a stolen laptop. Thieves will steal one out of every 10 laptops in the first year of ownership. An average of 12,000 laptops are lost or stolen in United States airports each week, according to the Ponemon Institute. This equals millions of dollars a year in laptop theft, loss and security-related crimes.

Advantages and Disadvantages of Laptop Computers

How to Tell If a Laptop Is New or Used?

Around The Home
Productivity
By: Brandon Wood

How to Remove a Desktop Battery From the Acer Aspire

Around The Home
Productivity
By: T.M. Wit

What is a Laptop Used For?

Around The Home
Productivity
By: Erik Arvidson

How to Restore an ASUS Laptop to the Factory Settings

Around The Home
Productivity
By: Susan Joyce