The dimensions of a laptop computer are defined by three aspects: width, depth and height. The width is measured across the top of the laptop when it's closed, such as from the left corner to the right corner. The depth is the other direction, such as the upper left corner to the lower left corner. The height refers to the space between the top of the laptop when closed and the bottom. In general, laptops have become thinner in recent years. 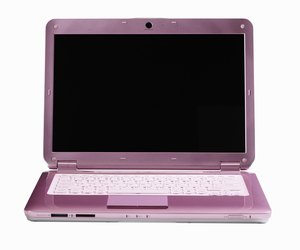 Screen size is not necessarily the same thing as the width of a laptop, an important distinction to remember when you're considering the dimensions, such as when buying a case. Screen size is measured diagonally across the surface of the screen, and does not account for the frame around the screen. Your laptop's width might be slightly larger than the advertised screen size.

Netbooks are the smallest of laptops, with screens ranging from 7.8 inches to 12 inches diagonally. Netbooks' width tends to be between 8 and 12 inches. These laptops are light on hardware, often without an optical drive, resulting in a thinner profile. Ultralight models are often even thinner still. Apple's MacBook Air, for example, is 0.11 inches in height at its thinnest point, broadening to 0.68 inches at its thickest point.

A standard or mid-sized laptop typically has a screen size ranging from 14 to 16 inches, with a width that's generally just a little bit wider than the advertised screen width. The depth is usually around 11 inches. A mid-sized laptop can reach about 1.25 inches in height, though this fluctuates depending on the model and its hardware.

Laptops designed for gaming or other programs that require intensive graphics and visuals -- such as video and photo editing -- are significantly larger than other laptops. The screen size is at least 17 inches, sometimes reaching the mid-20s. The computer itself tends to be at least an inch to 1.5 inches high to accommodate the video card and other high-performance components. This style of laptop is also called a "desktop replacement" laptop and isn't considered particularly portable.

What Are the Characteristics of a Laptop?

Around The Home
Productivity
By: Trevor Talley

How to Stream From My Laptop to My Television

How to Take Apart ASUS Laptops

Around The Home
Productivity
By: Ezekiel James

How to Change Your Laptop Screen From Vertical to Horizontal

Around The Home
Productivity
By: Joanne Reid

Around The Home
Productivity
By: Mark Kennan