Getting the Most Out of Apple Music

Although Apple's latest mobile operating system, iOS 9, isn't due to arrive until September, the company has already rolled out one of its major new components: Apple Music. The new music service is feature-packed but a bit confusing, though, so let's take a look at what it does and how it works. 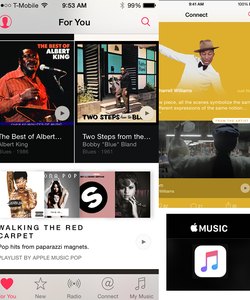 Apple Music serves two functions. First, it provides access to your music library, same as the Music app that preceded it. Second, it opens the door to Apple's eponymous new streaming service, which lets you listen to a mammoth library of music (some 30 million songs) for a flat monthly fee: $9.99 for individuals; $14.99 for families of up to six people. 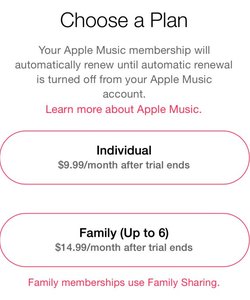 The streaming option is basically Apple's answer to Rhapsody, Spotify, and similar services, but one that's integrated into the standard iOS Music app -- the one you launch by tapping the Music icon on the home page. Thankfully, Apple Music is optional, so you can subscribe or not.

As of this writing, you can try Apple Music free for three months. Here's a walk-through of the app's key features.

Arguably the most intuitive area of the Music app is My Music, simply because it's the most familiar to iOS users. Accessible by tapping the My Music icon in the bottom-right corner, this section lists all the songs currently available in your personal music library. You can use the toggle at the top to switch between Library and Playlists views, or tap the Search icon to find a particular song, artist, playlist, or the like. 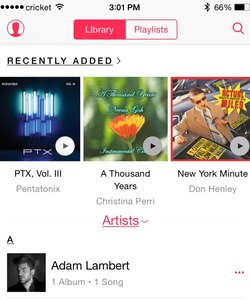 My Music hasn't changed much in this version.
credit: Rick Broida

You should note, however, that when you tap Search, you'll see two options: Apple Music and My Music. Tapping one dictates which library the app actually searches; yours or Apple's. Because so little has changed in the former, let's move on to the latter.

The bulk of the Music app is now devoted to Apple Music. Let's run down the four main sections, as represented by the icons across the bottom of the screen: Choose the kinds of music you like.
credit: Rick Broida

There are a few additional features in Apple Music worth mentioning, starting with the Station option: For any given song or artist you search for, you can tap the More icon (represented by three dots) and choose Start Station. This takes you into Pandora territory: the app creates an entire playlist (in this case a "station") of songs and artists similar to the one you selected. 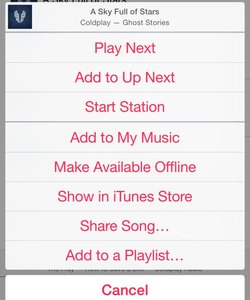 Within that same More menu, you'll see the option Make Available Offline, meaning the songs or album will download to your device, allowing you to listen to them without an Internet connection. That's a great option if you're about to get on an airplane, or you're heading somewhere without a Wi-Fi network. (You can stream Apple Music over a cellular connection, but doing so can eat through your monthly data allotment pretty quickly.)

Finally, Apple Music is also home to music videos. Search for, say, Taylor Swift, then scroll down past all the songs and playlists. You won't find them for every artist, but most of the big names are there.

And that's it! Now you know how to navigate Apple Music, and can get the most out of your time spent there.

How to Listen to Music on an iPhone

What Is Pandora QuickMix?

How to Turn Shuffle Songs Off on an iPhone