How a PBX Telephone System Works

Businesses can cut costs by using a private branch exchange. With a PBX, the business doesn't have to run a line from every phone in the building to the telephone company's central office. Starting with, or switching to, a PBX reduces the number of lines the company has to pay for. The exact savings varies from company to company, depending on factors such as the number of lines it needs. 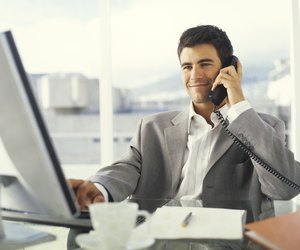 A businessman talks on the phone at his desk
credit: Ciaran Griffin/Stockbyte/Getty Images

The PBX Set Up

In the 20th century, private branch exchanges originally ran on analog technology, but now PBX systems have gone digital. The typical PBX includes several phone lines from outside the building that terminate at the company exchange. It also has several internal lines leading to the exchange for the inside phones. A computer manages the calls, switching them from one line to another according to the number dialed. A digital PBX doesn't need a human operator, though some businesses still use them.

Some exchanges relies on VoIP technology -- Voice Over Internet Protocol. VoIP telephone systems turn phone calls into data packages and send them over a computer network. A company's return on investment using VoIP will vary depending on the phone services it uses. Compared to a regular PBX, a VoIP or IP exchange cuts costs because the company can use one network for phone calls and data, instead of two. Instead of central switchboard, the PBX has a central server. The phones in the office have the software or hardware to connect to the server.

Instead of a business setting up the exchange inside its building, a virtual PBX turns that responsibility over to another company. From the business's point of view, everything works the same, but without having any of the tech on-site. Having another company provide virtual PBX services offers some advantages: There are no physical limits on the number of lines and it's easy to add more when needed. Virtual PBX systems are also known as hosted PBX.

Businesses can manage their phone systems without going PBX. A centrex -- central office exchange -- has the phone company provide the equivalent of a PBX. The local phone company reserves part of its network for the business paying for centrex service. The equipment may be off-site, like a virtual PBX, or installed on the business premises. Either way, it's the phone company's job to maintain it and upgrade it, rather than the customer's.

How to Set Up Avaya Voice Mail

Around The Home
Productivity
By: Christell York

How to Get a Cell Phone Using a Tax ID Number

Around The Home
Entertainment
By: Stephanie Ellen

What Is T1 Internet Speed?

Around The Home
Productivity
By: KurtJ

How to Get a TTY Machine

Around The Home
Productivity
By: Catlin Tidwell