How Do I Find Hidden Text in a Picture?

Hidden messages in images don't always present themselves as a "Where's Waldo" searching game; they can be hidden so that they are only revealed by changing aspects of the image's colors or levels or by combining the image with a separate text file. In some cases, the hidden text can be found by opening the image in Notepad, but you can also use an extraction program to try to find the text file directly. 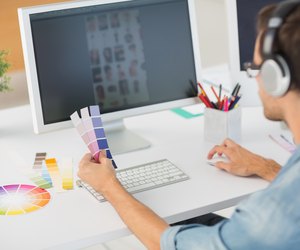 A man is using a photo editing program on his computer.
credit: Wavebreakmedia Ltd/Wavebreak Media/Getty Images

Altering an image's levels can sometimes reveal messages hidden in an image by a graphics program. Levels control the shadows, midtones and highlights of an image and modifying those levels can reveal parts of an image that weren't visible before. For example, if someone has almost-white text on a white background, you can make this text visible by adjusting the image's shadows via the levels controls. Many free online image editors let you perform this function. Try slowly adjusting the sliders from one end of the spectrum to the other to see if anything pops out.

Hue and saturation are two other aspects of an image that can be modified to reveal a hidden message. Messages revealed by altering hue and saturation are often found in images that are made up of many different colors jumbled together that don't appear to make anything. One example is an image full of colored dots; when the hue of the image is changed, patterns hidden within the colors become visible.

Text can be hidden within an image when a text file is combined with the image using the command prompt. In this case, viewing the text isn't much of a hassle. Right click on the image, click "Open with" and select "Notepad." You may need to click "Choose default program" to see Notepad as an option. The text may look like gibberish, but you only need to focus on what's at the end. Scroll all the way down to the bottom of the text; if there is any hidden text within the image, it will show up there.

Depending on the method used to hide text within an image, you can use an extraction utility like WinRAR, 7-Zip or PeaZip to extract the text from the image. This has the added benefit of displaying the text plainly without making you sift through gibberish. Open the extraction utility and then open the image; you may need to expand your options to view all file types instead of just archives to open the image. After you open it, any hidden text files that were combined with the image will show up.

Text to Path in GIMP

Around The Home
Productivity
By: Darrin Koltow

How to Find a Picture of Someone on the Web

Around The Home
Productivity
By: Oxana Fox

How to Make Pictures And Text Transparent In MS Paint

Around The Home
Productivity
By: Jenna Marie

How to Delete Text in Paint

How to Rasterize a Layer in GIMP

Around The Home
Productivity
By: Daniel Ketchum