To obtain your cell phone's frequency you must understand that the frequency is in megaherz. Megaherz is abbreviated to MHz and means a frequency unit equal to one million cycles per second. MHz are used to measure how quickly electronic devices transmit. It is important to note that a cell phone broadcasting at 1,800 MHz is not necessarily twice as fast as a phone broadcasting at 900 MHz. The relative speed of transmission has a lot to do with the processers the phones possess. 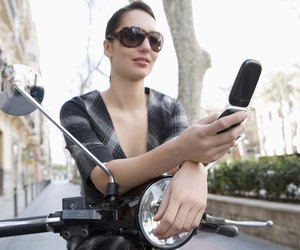 Cell phones generally use one of two frequency ranges. One is routinely known as 1900. It encompasses all frequencies between 1850 and 1990. The other is a PCS, or Personal Communications Services, frequency. The PCS uses frequencies from 824-894 MHz.

Visit Wireless Advisors website (See Resources). There you will be asked for your ZIP code. The website will take your ZIP code and give you all frequencies for all services in your area. Find the company you use, and note the frequency on which it broadcasts.

Frequency bands on which cell phones operate are part of an electromagnetic spectrum. Each cell phone user who is using a cell phone during a given moment takes up a certain amount of the available space, or bandwidth. To accommodate the number of customers in a given area, cell phone providers split the frequencies into ever smaller pieces. Thus, instead of being on frequency 824, you are more likely to be on frequency 824.3271 or some such subset of 824.

Radio transmitters cover a certain area of the spectrum, and the subsets. These need not be unique because transmitters are placed far enough apart that they can use the same frequencies without interfering with one another.

When cell phone users are traveling, most often in a car, the call is handed off on the same frequency from tower to tower, or cell to cell as they say in the cell phone industry. The towers are able to hand off the call without interruption.

What Type of Wavelengths Do Cellphones Use?

Around The Home
Entertainment
By: Ethan Pendleton

How to Beat Cell Phone Jammers

Around The Home
Entertainment
By: James Johnson

How to Disable GPS Tracking Systems