How Do I Install a Canon Printer Without a CD?

Canon printers are shipped with a setup CD to help consumers connect the printer to a computer. Depending on the printer model, the Canon printer setup CD may include some extra software applications related to printing. For example, the Pixma MX922 comes with Easy-PhotoPrint and My Image Garden applications for creating and printing photo projects. Although the CD provides a convenient way to quickly access the software needed for printing, you may still be able to connect a computer to a Canon printer even if you don't have the CD. 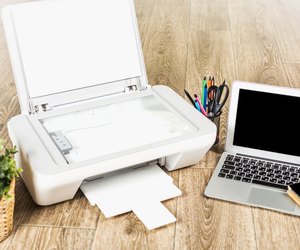 How Do I Install a Canon Printer Without a CD?
credit: FabrikaCr/iStock/GettyImages

Whether you've lost the CD for a Canon printer or don't have a CD reader on your computer, you can visit the Canon Support website to access the user manual and setup software. After entering the printer model and information about your computer's operating system, you can download the software needed to install and run the printer, which is most cases includes a setup utility and driver. The driver is the software the interfaces the computer with the printer. You can also download all the applications that were originally included on the setup CD, although this step is optional.

One benefit of downloading printer software directly from the manufacturer's website is being assured that you have the most current version. Software provided on a setup CD can become outdated in a matter of months.

You can also update the printer's firmware from the Canon website. Firmware is pre-installed software that controls the printer. Having a current driver and updated firmware can help avoid problems with printing.

If your computer is running a version of Microsoft Windows, you'll need to be logged on as an administrator before you can install printer driver software from either the Canon setup CD or downloaded from the Canon website. After downloading the setup and driver software, you should be given an option to run it. If you don't run a download file immediately, you can do so later my locating it in the "Downloads" folder and double-clicking on it.

Once setup is complete and the printer driver is installed, you may still need to complete steps in Windows to add the printer to the computer. These steps vary depending on the version of Windows you're running. Type "add printer" in the search field of the Control Panel if you're not sure how to proceed.

The process for finding and downloading Canon setup software is the same for Mac computers as for Windows. After installing downloaded software, you may need to install the printer by going to "Printers & Scanner" under System Preferences. If the printer software has been correctly installed on the Mac, the printer should be displayed in the list of connected printers and can be added by clicking the "Add" button.

If you want to do some quick basic printing without taking the time to download and install a driver and other software, you may be able to take advantage of your computer's built-in printer drivers. More recent versions of Windows and Mac computers include drivers for some popular printer brands as part of the operating system. These drivers only work for printers that support a USB connection and do not support many special features the printer may provide.

To find out if you can use a built-in driver, connect the printer to your computer using a USB cable and turn the printer on (you may need to use an adapter for the USB connector on a Mac). In many cases, turning on the printer will trigger printer installation. When installation is complete, you should be able to add the printer. Although this method may allow you to print, Canon recommends that you download the correct software if you plan to do a lot of printing.

How to Install Mac Printer Drivers

Around The Home
Productivity
By: Steven Symes

How to Connect a Canon MP210 Wirelessly

How to Set Up a Network Printer on the MacBook Pro

Around The Home
Productivity
By: Andrew Schrader

How to Set Up a Canon All-In-One Printer