Losing the TV remote or having it fail has always been annoying, but up until recently it has been simple enough to operate a television without a remote that it was only a minor inconvenience. However, the rise and wider adoption of smart TVs has made TV remotes all the more important – and made their loss all the more frustrating. While TVs will still have buttons to control their basic features, it can be harder to figure out methods to change the TV's input mode or access its smart features without the remote. Thankfully, even without a remote there are still a number of options available to a user who needs to use functions besides channel or audio control. 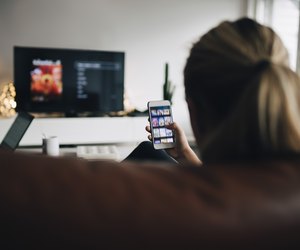 No Remote, No Problem

Though modern televisions are packaged with remote controls, some of which now function as game controllers and offer features meant to work in conjunction with the TV set, all TVs are designed in such a way that they can be used in the event of the remote's failure or loss of battery power. In some cases, the loss of a remote may render certain TV functions unavailable, but even the most advanced smart TVs on the market ensure that users can enjoy their televisions with or without the remote in hand. Depending on your make and model of TV, you may even be able to control it through the use of your voice – rendering the need for a new remote control moot, or at least low-priority.

The simplest way to change a TV's input mode is to use the buttons located on the front, side, or bottom of the television itself. While this may not work well on older television models – and may or may not work on present models, depending on the design – it is generally possible to change the TV's input mode by pressing a button labeled "Input," then using either the channel or volume keys to select a desired input from the menu that appears. On smart TVs, there may be a separate or equivalent "Menu" button that will allow you to select apps and other features in the same manner. If your TV is older and lacks an input or menu button, it may still be possible to switch inputs by changing channels: in some instances, the input channels will be located 'below' channel 2. Some models may also feature a "Scan" button on the side or rear of the television that, when pressed, will search and automatically connect to an input device.

If you find yourself in need of certain TV features that cannot be accessed through the on-unit buttons – or are looking for a solution that still works from the couch -- it may be possible to turn a smartphone or tablet into a remote control or universal remote. On both the Play Store and iTunes App Store a number of apps exist to turn your device into a universal remote: because television remotes work through the use of an infrared (IR) pointer, any device with an IR blaster built into it can mimic the signal to control the TV. You can use this to change a Toshiba TV video input without a remote, or most other brands of TV too.

Which Phones Have IR?

While most current-generation smartphones and tablets lack IR blasters, some older models of smartphone (such as the Samsung Galaxy S6, or HTC One M9) have them and can be used as spare remotes. At the same time, so long as your smart TV has been connected to your WiFi network you should be able to control it using a controller app released by the manufacturer. If your TV has been upgraded with a Chromecast, Roku TV, or Amazon Fire TV stick, you can control it in a similar manner. Simply download the appropriate app and follow its instructions to connect: once you complete the setup process you will be able to control your TV through the use of your smart device.

How to Operate a Sanyo TV Menu Without a Remote

How do I Work a Durabrand TV Without a Remote?

How Do I Get to the Input on a Vizio TV?

Around The Home
Entertainment
By: Herman Cruz

Benefits & Disadvantages of the TV Remote

Around The Home
Entertainment
By: Noel Shankel