A BIN file, with the .bin extension, is usually one containing some kind of binary data, meaning data not directly readable by a human. Sometimes these files are images of discs like CDs or DVDs, in which case it usually makes the most sense to open the file as a virtual drive and extract any data, including text. In other cases, you can use specialized programs to extract readable text from the file even if you can't decode the binary file to text in its entirety. 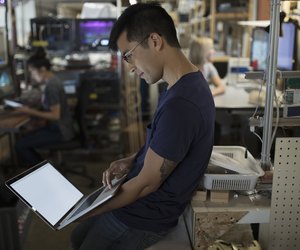 Usually if you see a file with the extension .bin, it's meant to indicate that it's a binary file.

Software and programmers often distinguish between binary files and text files. Text files represent characters such as English letters, Chinese characters and emoji using standardized numerical coding systems such as ASCII or Unicode, and they can be opened by wide varieties of programs that understand these standard coding schemes.

Binary files store data in a way that's meant to be interpreted by other software but not directly read and written by humans. Different programs store different types of binary data in different formats. It may be possible to convert a binary file to text depending on what is in it.

Traditionally, the .bin extension has been used by some programs that read and write CDs, DVDs and similar types of discs to store disc images. More recently, the extension and file format .iso has become more common for this purpose.

Programs designed to copy data to and from CDs and DVDs can open .bin files. Some examples include PowerISO and MagicISO. Shop around for a program that meets your needs in opening .bin files, ISO images and other common disc images.

If the .bin file is a data disc image, you can open it as a drive on your computer using one of these tools and browse through the files on it. If there are text files or other common data formats such as spreadsheet files or Microsoft Word documents, you can open them and see what is in them, including text.

If the file is an image of a music CD or a movie on DVD or Blu-ray disc, you can often play it with a media player program such as VLC.

It can be difficult to find a tool to open a BIN file online simply since the disc images are ordinarily quite large.

If a BIN file or other binary file contains text, there are programs to extract the text.

If you know the program used to create the file, that may be your best bet. Otherwise, you can use tools called hex editors that will display the numerical data in the file as numbers in the hexadecimal numbering system as well as any potential text in the file side-by-side with its hexadecimal representation.

Other tools, like the common and free command-line program strings, will extract text from the file and display it.

How to Create a .TXT File With a Mac

What Are the Differences Between ISO and IMG Files?

Around The Home
Productivity
By: April Kohl

How to Open a DAT File

Around The Home
Productivity
By: Karin Sundstrom