Japanese animation, referred to as anime, shares some characteristics with Western cartoons, but has a unique style of its own. By applying these design features to a photo, you can transform the image to resemble a Japanese anime character. For the best results an image editing program such as Photoshop or GIMP is required, but you can achieve similar effects with free online converters and editors. Use these services to transform your photo into an original creation or to make your subject resemble a famous Japanese anime character. 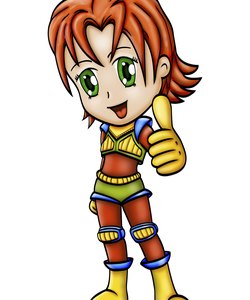 Anime characters usually have very large eyes in comparison to the rest of their facial features, especially the female characters. The larger eyes allow the characters to express more emotion and make them look more innocent than someone in real life. Anime characters also often have eye colors that are unlikely in real life, such as purple, red or pink. If an anime character is a villain, she tends to have smaller eyes. Tools for enlarging the eyes of your subject include the Bloat tool in Pixlr (link in Resources) and Photoshop as well as the IWarp Grow tool in GIMP.

Just like their eyes, anime characters usually have exotic hair colors such as pink, green, blue and purple. Their hair often defies gravity, and pointy edges are not uncommon, as they make the character look more dramatic. The style and color are often used to denote their personality type, so a character with red hair might have a quick temper, while someone with blue hair tends to be more calm and serene. When converting a photo into an anime character, try to match hair color to personality type. Changing the colors of hair or eyes is possible using Paint Brush or Paint Bucket tools in most image editors such as Gimp, Photoshop or Pixlr and can be done nondestructively by using layers if the program supports this feature.

The mouth and nose of an anime character are typically much smaller than on a regular human being, especially in comparison to their overly large eyes. Depending on the mood of the character, this can change, with the size of the mouth increasing if a character is shouting or shocked. If an anime character is very angry, she might also be depicted with fangs instead of teeth. Shrinking the nose and mouth can be achieved using the Pinch tool in Pixlr, Pucker tool in Photoshop or IWarp Shrink tool in Gimp.

A variety of iconography is typically used to portray the emotions of anime characters. These range from red lines across the face to signify blushing, a large sweat drop on the face to indicate acute embarrassment and stylized veins to show that the character is extremely angry. Long wavy lines running down from the eyes indicate that the character is crying, while happiness is portrayed with stars and white spots being shown in the pupils. The Paint Brush tool found in applications or services such as GIMP, Photoshop or Pixlr can also be used to add the emotional iconography to the image.

Applying the characteristics of an anime character to a photo of a real person usually produces very unrealistic-looking results unless the image is also changed so that it appears hand drawn. Use a combination of services and applications when converting your photo to achieve the best results. The Pho.to and Photo-kako websites (link in Resources) have a cartoon effect filter that you can apply to your image to make it look hand drawn. Use this in conjunction with the other changes you made to the image to make the results look natural.

How to Change Gender in Photoshop

How to Remove Facial Hair in Photoshop

Around The Home
Productivity
By: Joshua Mcgee

How Do I Add Fake Braces to a Picture Online?

Around The Home
Productivity
By: Irene A. Blake

Around The Home
Productivity
By: Rose Broyles

How Do I Lengthen a Neck in Photoshop?

How to Draw With a Keyboard

Around The Home
Productivity
By: Ty Arthur