How to Listen to Music on an iPhone

The iPhone has come a long way since its introduction, but playing music is still one of the device's core features. Whether you , from your computer or download songs , playback begins in the Music app.

Play Music in Your Library

Open the Music app to browse through all the songs on your phone. In iOS 8, the app has several ways to sort your music. Pick a tab such as Songs or Albums, pick a group -- such as a particular album -- and then tap a song to start the music. If you choose from an album, artist or other group of songs, you'll also see a Shuffle button to play random songs from the current list. 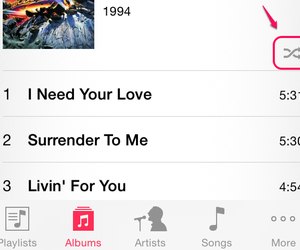 When the music starts, the screen displays the playback controls. 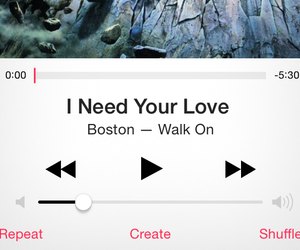 Directly beneath the album art is the progress bar. Swipe left or right on the bar to move to a different part of the song. For more precise movement, swipe down from the bar, and then move your finger left or right.

The lower bar -- beneath the Previous, Play/Pause and Next buttons -- controls the volume. At the bottom of the screen are toggles to Repeat and Shuffle. The Create button starts a new Genius playlist from the song.

To return to your music library and pick another song, tap the Back arrow at the top of the screen. Your phone keeps playing the original selection until you choose another song or tap the Pause button in the playback controls.

Once the music starts, you don't need to stay in the Music app. Press the Home button, and you're free to use other apps. If another app uses sound, however, it stops your music.

Rather than return to the Music app every time you want to pause or skip a song, swipe up from the bottom of the screen to open the Control Center. 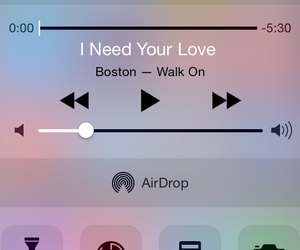 The Control Center has basic controls for music playback, as well as an AirDrop button for sending music to an AirPlay device. To pick an entirely new song, tap the song name to reopen the Music app.

Apple launched iTunes Radio alongside iOS 7, providing free, ad-supported music streaming to iPhones and other Apple devices. To tune in, open the More tab in the Music app and tap Radio. Choose a featured radio station to start listening right away or tap New Station to create your own customized station.

To create a station, search for an artist or a particular song, or pick from the list of genres. If you pick from the genre list, choose a sub-genre and then tap the + icon to join the station. If you use the search bar, simply tap one of the results. 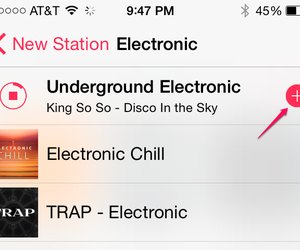 Join a genre station with the + button. Subscribing to radio stations is free.
credit: Image courtesy of Apple

The playback controls in iTunes Radio look similar to those in your music library, but they don't offer as many options. You can't return to the previous track, and you can't seek to a different position in the song. Radio stations also have a limited number of skips: six per hour per station. The star button opens a menu with links to add the song to your iTunes wishlist, to play more similar songs or to play fewer similar songs. 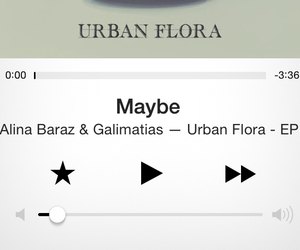 How to Turn Shuffle Songs Off on an iPhone

What Is Pandora QuickMix?

How to Sort Music in an iPhone

How to Exit Out of Pandora on an Android Phone

How to Delete Podcasts From an iPhone