More than any other factor, an iPhone's battery life depends on how you use your phone. Left untouched on your desk, an iPhone 6 can stay alive for 10 entire days on a single charge. Start using the device actively, and that number drops to under half a day. Every component of the phone uses some battery power, but the major drains to keep in mind are the screen, the radios, and the processor. The best solution to low-battery woes, however, is simply to plug in your iPhone as often as possible. 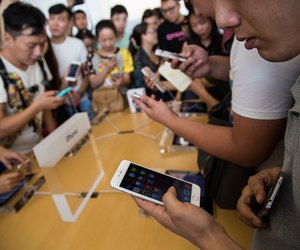 An iPhone's back-lit screen places a significant load on the battery. Switching from listening to music with the screen off to watching a video reduces the iPhone 6's battery life from 50 hours to just 11. Turn up the brightness, and that lifespan falls even further. Rather than rely on the phone's automatic brightness, set the light level as low as you can stand: Swipe up from the bottom of the screen to open the Control Center and slide the brightness bar to the left. Some apps require you to swipe up twice to reach the Control Center.

Staying connected to your cell network, Bluetooth devices and Wi-Fi router puts a continuous drain on the battery, even when you have the screen off. Under ideal conditions, the phone's radios don't use an unreasonable amount of battery, considering how vital they are to the device's function. If you have a weak cell signal or are out of Bluetooth range, however, the phone uses extra power to try to connect. Turn off Bluetooth or Wi-Fi from the Control Center when you don't need them, or enable airplane mode to shut off all radios, including the cell radio, when you're outside your service area.

If you don't want to completely turn off your connections, reduce their use by switching off background app refresh for some apps in the General section of the Settings app. Changing your email settings to refresh manually or to Fetch on a slow schedule, instead of using Push or a frequent Fetch, also cuts down on battery use.

If you've ever noticed the back of your iPhone warm up while playing a game, you've directly felt the effect of the processor crunching data at high speed. Apps that heavily tax the processor require more power and produce more heat as a byproduct. Playing a game while waiting for a call helps to pass the time, but if your battery is low, stick to lower intensity activities such as listening to music. And when an addictive mobile game turns into an all-day activity, play with your phone plugged in to avoid an unexpected dead battery in the middle of a round.

With an iPhone, you don't need to worry about maintaining a special charging schedule, so plug in whenever you can. Unlike some old battery technologies, such as nickel-cadmium batteries, an iPhone's lithium-ion battery doesn't need to drain completely before each recharge. Like all rechargeable batteries, your iPhone's battery will lose a bit of its maximum charge level over several years, but the charging schedule makes no difference to this slow degradation.

One last word of warning: apps promising to improve your battery life can't perform magic. Whatever an app claims, the only way it can actually improve battery life is by altering the same system and app settings that you can tweak for free in the Control Center or the Settings app. A battery management app might automate these options for your convenience, but it won't pull electricity out of thin air.

How to Find Out What Is Draining Your iPhone Battery

How to Set Standby on your IPhone

How to Turn Off Apps on the IPhone

How to Charge Your iPhone Correctly