How to Rate Movies on Netflix

There's more to ratings on Netflix than just tracking your own favorite movies and shows. Netflix recommends titles based on a combination of your past ratings and your taste preferences. Even the average star ratings Netflix shows you are influenced by your own ratings: A movie might be overwhelmingly popular, but if your past ratings indicate you wouldn't like it, Netflix shows you a lower score. Rate shows and movies as you watch on any device, or to quickly build up a rating history, rate titles in bulk on the computer.

Rating works similarly on every device and system. Pick a title and select a number of stars from one to five. After rating a title, it displays your rating in gold stars, rather than the average rating in red stars. 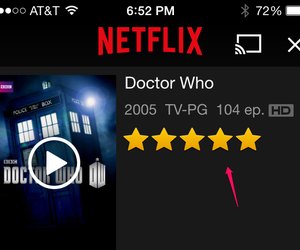 Tap a program while browsing or searching to open its information page, and then tap a star to set the rating.

Netflix on the Web 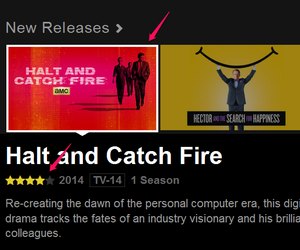 Netflix's new Web interface brings the site's style in line with other devices and changes the method for rating programs. Click a title card -- anywhere except on the pop-up Play icon -- to open an information panel. Click one of the stars in the panel to set your rating.

Netflix on Other Devices

Every smart TV, Blu-ray player, game console and streaming device has a slightly different version of the Netflix app, but the same process holds true in most cases. Choose a title, select the Rate This Program or Rate option with your remote or controller and then use the arrows or directional pad to select a star rating. 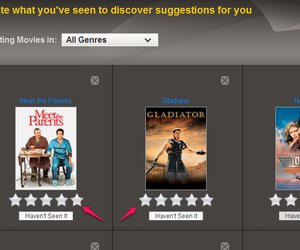 When you first join Netflix, the site doesn't have much information on which to base your likes and dislikes. Give it a jump start by rating shows and movies you've already seen. Visit the Rate Movies page from a computer and choose a rating for everything you've seen. As you rate each title, another takes its place. Keep going for as long as you want; the more ratings you provide, the better recommendations Netflix can provide. 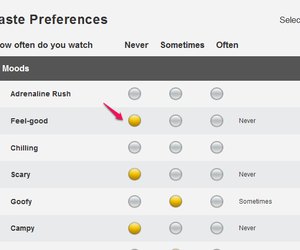 In addition to rating individual shows and movies, set your taste preferences to give Netflix an idea of the types of media you enjoy. Choose Never, Sometimes or Often to indicate how often you watch programs of each type. You don't need to give an answer on every line. Answer whichever you feel like, and return later to make changes or submit more preferences.

What Are Bookmarks on Pandora?

How to Delete History of Movies Watched on Netflix

Use This App to Find out Where the Locals Eat