In most situations and by most standards, owning a mobile phone would be considered advantageous. Countless benefits exist in having the ability to communicate at any time in almost any place. However, there are many disadvantages to mobile phones that often get overlooked or dismissed and are overshadowed by the impressive array of bells and whistles in each new device. 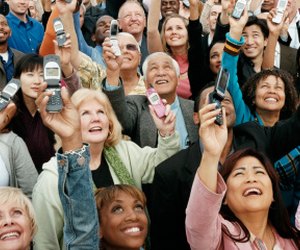 There are many advantages and disadvantages to mobile phones.

Perhaps the most significant advantage of the mobile phone is that you will never be out of reach. With only a miniscule portion of the world not covered by cell phone signals, you should be able to make and receive phone calls from just about anywhere. However, this fact may also be viewed as a potential disadvantage to owning a cell phone. If you want privacy, or simply some alone time, the cell phone makes it difficult or impossible to get away.

For years, the debate regarding cell phones and their potential negative health effects has raged on. Claims have been made that cell phones cause cancer, infertility, birth defects, and a host of other dramatically detrimental physical problems. In 2011, after reviewing a variety of peer-reviewed studies, the World Health Organization listed cell phones as a "possibly" carcinogenic hazard to humans, without finding conclusive evidence that the phones cause cancer.

A major disadvantage to owning a mobile phone is the simple fact that the device is a distraction. Many people become oblivious to their surroundings because their focus is on the phone. This is particularly problematic when people use the phone while driving or performing other tasks that require more concentration. Even the quality of face-to-face communication can be damaged by obsessive cell phone use.

Cell phones allow us to be more efficient than ever before. Instant communication with nearly anyone anywhere in the world has dramatically increased the speed with which business is conducted. Combined with unlimited and unrestricted Internet access available on today's mobile phones, obtaining information takes only seconds.

The ways people now interact with one another are dramatically different than in previous generations, and this fact is a direct result of the invention of the mobile phone. E-mail and text messaging have all but replaced hand writing a letter. Today's youth will grow up with an entirely different set of social skills, potentially lacking the ability to properly handle face-to-face interaction.

The Advantages of Mobile Phone Games

Around The Home
Entertainment
By: Lucas Kittmer