What Are the Advantages of Having Wi-Fi on a TV?

Wi-Fi televisions require your computer's wireless high-speed Internet connection to display online content. The televisions contain a built-in wireless adapter and let you watch programming directly and immediately from the Internet. Content includes movies, videos and social media network as well as other websites. Wi-Fi televisions vary in price and are available at electronics and retail stores as well as online electronics outlets. 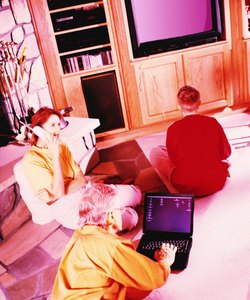 Wi-Fi televisions let you view websites without having to use your computer.

The televisions work anywhere in your residential or commercial structure as long as the wireless Internet signal is available. You don't have to run coaxial or Ethernet wires through your home or business. Just place the television on a flat surface, plug it in and follow the device's on-screen setup procedure. Wi-Fi televisions provide uninterrupted access to the Internet 24 hours a day, seven days a week. Also, you can still access the Internet on your computer and other devices while watching online programming on the television.

The televisions contain a user-friendly menu that walks you through setting up your Internet's configuration within the devices. Wi-Fi televisions work on any high-speed connection containing a router including broadband, Digital Subscriber Line, Integrated Services Digital Network and similar Internet services. The televisions also work anywhere in the world that has a Wi-Fi signal — even a Wi-Fi signal generated from a cellular phone.

What Do You Need to Stream Hulu to a TV?

How to View Netflix On a Blu-ray Player

Around The Home
Entertainment
By: David Wayne

How to Connect to a Public WiFi Connection

How to Set Up Roku Wireless

Around The Home
Entertainment
By: James Crider

How to Change Channels for Netgear WiFi

How to Connect a Computer Modem to a TV