Roku is a device that allows you to stream video and audio content directly to your television. Using a Roku device is easy and user friendly. A small black box, Roku plugs directly into your television and can be set up in minutes. Many devices on the market allow you to access instant videos and music, and Roku has its own pros and cons. 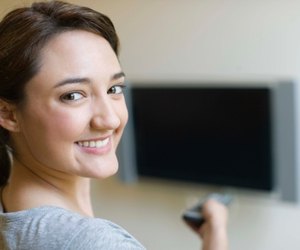 Using a Roku device, you can stream movies directly to your television.

Roku provides access to video and audio content. Companies that stream TV shows and movies include Netflix, HuluPlus and Amazon. Musical content is accessible from Pandora Internet Radio and MP3Tunes. For sports fans, Roku provides access to NHL Gamecenter Live, NBA Gametime and UFC. News is available via Roku Newscaster, which provides news from places like NBC, CNN, and CBS. Although this is a large catalog of content, some of these companies also require paid memberships, adding to your cost.

Roku is a small, black box that plugs directly into your television. Users with current digital televisions can use the HDMI port. However, Roku also provides RCA video/audio outputs for users with older televisions; Roku's competitors do not. Roku's current XD|S model also has a USB port that allows users to play MP3 and MP4 audio and MP4 video files. You can also load and view JPG files. The con is that many users have .avi video files, which the Roku XD|S cannot play.

Around The Home
Entertainment
By: Carlos Mano

What Is a Roku Box?

Around The Home
Entertainment
By: Michelle Mista

How to Connect to Roku With a Wired Internet

How to Reset My Sanyo TV

Around The Home
Entertainment
By: Bryan Roberts

How to Setup Netflix on My Roku

How to Save a Playlist in VLC