What Is the Difference Between DVDrip and DVDscr?

With the rise of streaming services, ultracompact solid-state storage and even Blu-rays, the DVD doesn't get as much play as it used to. Even including Blu-ray sales, U.S.-based subscription streaming services raked in $9.55 billion in 2017 while discs made only $4.72 billion, according to Statista. So no one's going to blame you if you don't know DVD-based jargon like dual-layer disc, SACD, SVCD or Pulse Code Modulation. 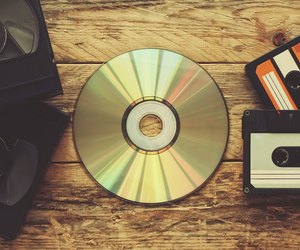 Some of that jargon deals with the visual quality of a DVD, which is determined when a DVD is "authored," or when the movie is formatted from a computer onto a DVD that's viewable in standard players.

In the DVD authoring world, various levels of DVD movie quality are referred to in certain tiers – DVDSCR is one of those quality tiers. But what's the meaning of DVDSCR, anyway?

DVDSCR (aka DVD SCR or DVDscr) is short for "DVD screener." In the film industry, a "screener" is a video recording intended for private use, such as promotional copies sent to video stores (back when video stores were a thing) or film festivals before the movie's wide release date or copies sent to industry professionals like reviewers or juries during award season. In the days of humble pre-DVD means, we had VHS screeners, too.

The video quality of contemporary DVD screeners is often just the same as what's found on a commercial DVD since, like the retail version, it's copied from the film reel (or the movie's original digital footage) to a computer to a disc. But this private-use-only disc doesn't include any extra features (like making-of documentaries or commentary tracks) and often has some sort of on-screen watermark – such as a serial number, logo or legal message – to confirm that it's not intended for retail sale or public viewing. Of course, Blu-ray screeners are a thing now, too.

At the rock-bottom tier of DVD quality is a cam-quality DVD, which is typically produced when someone illicitly records a movie at the theater on their phone or home video camera (using the built-in microphone), uploads the recording to their computer and burns it onto a DVD. This makes for poor audio and visual quality. A step above cam-quality is the rarer telesync (TS) DVD, which may feature the movie's direct audio track (often captured by using an in-chair headphone jack made for theatergoers who are hard of hearing), but which still features video originally filmed off a screen.

Getting into more professional (and more legal) territory, an "R5 retail" DVD refers to the quality you'll see when a commercially produced DVD is sitting on store shelves. Typically, it'll look and sound like a screener, but doesn't have any watermarks, and it usually features an interactive menu and sometimes includes bonus features on the disc.

What About DVD Rip?

You guessed it: When you rip a DVD onto your computer, the digital movie file you end up with is often dubbed a DVDRip (or a Blu-ray rip, if you got it from a Blu-ray). The quality of the image and sound here will depend on the quality of the film on the disc and the software and codec (or data compression method) used. So, yes, worlds can collide and you can end up with a DVDSCR rip (though considering the intended use of screeners, you probably shouldn't without permission).

How to Use the Xvid Codec

What Is a DVD Multi Recorder?

Around The Home
Entertainment
By: JoshuaB How to Rip a DVD Onto a Hard Drive in CyberLink

Around The Home
Productivity
By: Jennifer Brown

How to Transfer a DVD to an External Hard Drive