How to Buy a Drone for Your Kid 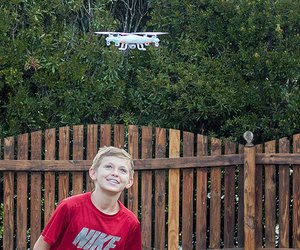 The problem: Your kid wants a turn with your drone, the one you spent half a month's salary on. The one with the pricey GoPro camera attached. The one he or she will invariably fly into a tree/power line/Grand Canyon.

The solution: Get your kid a drone. No, really.

This won't cost nearly as much as you think. Drone prices have dropped considerably in recent months, with some models selling for as little as $20. But before you give your child her own flying machine, make sure to do a little research. Not every quad-copter is kid-friendly, and some models are definitely easier to fly than others. Here's everything you should know about buying a drone for your little pilot.

Where is this drone going to fly? Ideally it would work just as well outdoors as it does indoors, but that's rarely the case. Size counts, and anything smaller than a Frisbee is probably not going to work well outside. Even the gentlest breeze can make a small drone difficult to control. 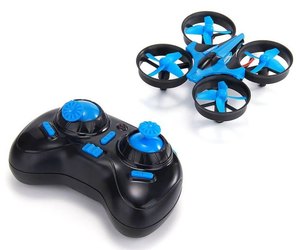 For example, the JJRC H36 (currently $21.97 at Amazon) weighs less than an ounce and is tiny enough to fit in the palm of your hand. It's definitely an indoor-only drone. The Syma X5HW (currently $56.99 at Amazon) has a little more meat on its bones, measuring roughly 12 inches across, and can better stand up to light wind. 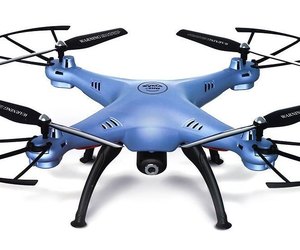 My advice: The younger the kid, the smaller the drone should be. Older kids will have an easier time with larger models.

Blade guards are a must

Whether the drone is flying inside or out, insist on a model that has blade-guards. These plastic shields put a barrier between sharp, fast-spinning propellers and their very likely collisions with walls, furniture, trees, and especially fingers and faces.

For example, I very much like the Aukey Mini-Drone ($29.99), which has lots of great features -- but no guards. That makes it an unacceptable choice for kids. It's just too easy to lose control of a drone, and while blade-guards don't guarantee safety, they definitely help.

The two most important flight features for kid pilots

When it comes to choosing a drone for your young flyer, you have about a million options. But there are only two that matter: auto-hover and headless mode.

Auto-hover takes the Z axis out of the equation: Once you've set the altitude with the left stick, the drone stays put at that altitude. Now you can focus on direction, which makes overall piloting much easier.

Likewise, headless mode means the control stick does the steering: push left to fly left, right to fly right, and so on. It doesn't matter which way the drone is pointed; there is no front in headless mode. It's another feature that makes flying way easier.

A close third in the must-have department: a return-to-home button, which will immediately fly the drone back toward the pilot (and, in some cases, land immediately after). That's essential for inexperienced pilots who might get flustered and have difficulty reclaiming control. 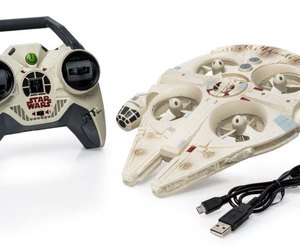 Very cool, but not the best choice for young pilots.
credit: Air Hogs

Unfortunately, these essentials aren't yet commonplace in some of the drones your kids are most likely to want, like the Air Hogs Star Wars Millennium Falcon. It may be incredibly cool, but it doesn't offer auto-hover, auto-return-to-home, or headless mode. Consequently, the Force is weak with that model, because it's way too hard to pilot.

Speaking of control, a lot of drones these days are controlled via tablet or smartphone app. That might seem like a logical option for screen-savvy kids, but I highly recommend choosing a model that comes with a dedicated remote. Tactile controls are much easier to master than those requiring you to look down, figure out where to tap or swipe, and so on. Overall flight is easier as well, as joysticks will always afford better precision than onscreen controls. Similarly, tilt-based steering (in which you tilt the device to control the direction of the drone) sounds cool, but it's difficult to master.

Most small drones have small batteries, meaning flight time will usually be limited to around 6-8 minutes. (That's true of a lot of medium-size models as well.) Needless to say, that's not nearly enough.

So extra batteries are a must. The good news is they're usually cheap: $15-20 for 3-5 batteries, often with an external charger included. But prices rise sharply as drones get bigger and more sophisticated -- another reason to stick with small, inexpensive models for your kids.

One thing to keep in mind is that small, inexpensive drones aren't likely to be super-durable. It's not uncommon for the first flight to be the last flight, owing to either a fatal crash or a defective part. Make sure your kids know that drone flying is challenging even for adults, and motors, props, and batteries can be replaced.

Let's recap. When shopping for a drone for your kid, follow these guidelines:

The Smart Nightlight Every Nursery Needs

Around The Home
Productivity
By: Liane Cassavoy