Acer keyboard designs vary among the company's laptop computer models. However, Acer uses only a few styles of media keys for volume control. Chances are that wherever the volume function is on your Acer keyboard, it is clearly marked with volume icons. 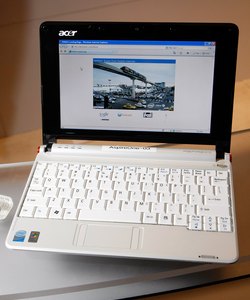 This method is one of the most common for Acer computers. Acer netbooks, such as the AspireOne, save on space by ditching dedicated media keys. Instead, the Function key, labeled "Fn,'' located by the right "Ctrl" key, works in conjunction with the up and down arrows to control the volume on your computer. This method of control is referred to as a hotkey. These are the only dedicated keys for media on Acer netbooks. This method of volume control was also used on the Acer Ferrari 5000 and the TravelMate C310.

On some models, like the Aspire 9920G, the media buttons are on a small sidebar to the left of the keyboard. These are easy to use, as the volume has some degree of touch control. The volume portion of the slider is marked, and is nestled along with buttons that skip forward, backward and control play/pause function. Older models may have standard media buttons above the keyboard, as is typical with some other laptop manufacturers.

If you're using an Acer that has standard, dedicated media buttons, you only have to press the button to change the volume. If the buttons are touch-based, sliding back and forth between decreasing and increasing will change volume. If you're using one of the many Acer models that use hotkeys for the volume, hold down the "Fn" key and press either the up or down arrow.

How to Fix My Volume on My Laptop

Around The Home
Productivity
By: Maxwell Payne

How to Turn the Volume Down on Your Dell Laptop

How to Program a Lenovo Keyboard

How to Adjust the Speaker Volume Using the Computer Keybord

How to Play a DVD on a Sony Vaio Computer

How to Scroll Using an Acer Touchpad