How to Convert an LCD Computer Monitor to a TV 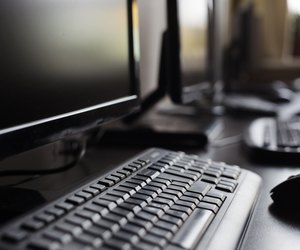 Using a spare to give your computer a second screen is one possible use – and a good one – but you can also use a computer monitor as a TV screen.
credit: Koldunov/iStock/GettyImages

When you retire old computers or switch to a laptop, it's not unusual to have a monitor or two left over when you're done. Using a spare to give your computer a second screen is one possible use — and a good one — but you can also use a computer monitor as a TV screen. It's an inexpensive way to add a TV to a room that doesn't have one and reduce the amount of tech in your local waste stream.

Computer monitors and televisions traveled separate but related paths through most of their history, but at present, they use essentially the same technology: They're both flat LCD panels with high resolutions, quick refresh rates and — usually — HDMI inputs. Most also come with the option of using a desktop stand or wall mount.

So what's the difference between a TV and a monitor? It boils down to a few things. One is sound capability. Some monitors have built-in speakers, but they're usually of poor quality, and most monitors don't have any at all. TVs also can tune a signal from over-the-air broadcasts, which monitors can't, and they come with remotes to provide easy control over channel selection and volume.

Computer monitors usually have none of those things, so you have to come up with a workaround.

With a Set-Top Box

If you typically use your TV with a cable or satellite box, most of those differences don't matter because your set-top box has its own tuner, remote and audio outputs. Basically, you're already using your TV as a monitor, especially if you have a home theater setup to handle the sound.

For monitors with an HDMI input, you only need to run a cable from the set-top box to your monitor's input to get a picture. If your monitor has speakers or a headphone jack that can run a pair of self-powered speakers, connect those and you're done. Alternatively, you can connect from the audio outputs on your set-top box to a stereo or a set of powered speakers. If your box doesn't have audio out, you can buy an adapter called an HDMI audio extractor to add that separately.

You can also convert a monitor into a TV by adding a TV tuner box, which receives local broadcast channels over the air. It connects the same way as other set-top boxes, though you need a TV antenna to connect. In most cases, you can pair a TV tuner with another set-top box or streaming device for maximum versatility by connecting the output of one to the input of the other.

With a Streaming Device

If you plan to use the monitor primarily for streaming TV content, connecting a streaming device such as a Fire Stick, Roku or Chromecast to your monitor works in much the same way. Connect it to the HDMI input on your monitor. These devices don't always have their own audio output, so they're best used with a monitor that has speakers or a headphone jack of its own.

Alternatively, if you have a spare computer kicking around, you can use the computer as your streaming device and audio source.

Not all monitors have HDMI inputs. Some newer models have a DisplayPort connection instead, while older monitors might have a DVI connector or a 15-pin VGA port. In most situations, you just need an adapter to convert from one to the other. DVI and VGA don't include support for audio, so you must deal with that separately.

Some devices require at least 720p resolution, and an old monitor might not meet that standard. Look up your monitor's available display resolutions, which consist of two numbers with the larger one first. As long as the second number is higher than 720, you're good to go. Turning a ancient VGA monitor with a resolution below that standard into a TV might only work when connected to a computer as your streaming device.

How To Turn a Computer Monitor Into a TV

How to Turn a CRT Monitor Into a TV

Around The Home
Productivity
By: Gregory Thompson

How to Hook Up a TV Antenna to an LCD Monitor

What Is the RGB-PC Input on My TV For?

Around The Home
Entertainment
By: MikeS