How to Convert .Pdf to .Ai

The AI file format is the default format used by Adobe Illustrator, a common program used for drawing and editing digital graphics. Portable document format, or PDF, files are widely used to send documents across the internet. You can import PDF files for editing in Adobe Illustrator or edit them in another Adobe program, Adobe Acrobat. You can also convert and edit PDF files with third-party tools. 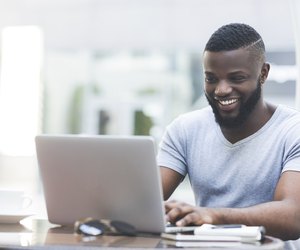 If you've ever downloaded a document such as a government or business form from the internet, you may have encountered portable document format, or PDF, files. This file format, largely developed by Adobe, is used to create files that look and print the same across a wide variety of devices. They can be opened with Adobe's Adobe Reader or Adobe Acrobat software, as well as most modern web browsers and software that ships with most modern operating systems.

Another type of files, called AI files, are used by a program called Adobe Illustrator. It's a tool for creating and editing vector graphics files, which are files that use the mathematical relationships between parts of an image to create pictures that can easily be scaled in size. Other common formats for vector graphics include the SVG, or scalable vector graphics, files commonly used across the web.

Often you will receive a PDF file and simply want to read it or print it out. Other times, you might use the built-in PDF fillable form feature to fill out fields in a PDF, such as entering dollar amounts into a tax form or signing your name to a contract.

But in some situations, you will want to edit the PDF file in order to change it in some way, whether that means rearranging elements of the PDF or changing text. You can do this in Adobe's program called Adobe Acrobat, designed for working with PDFs, or you can convert the files to a vector graphics format and edit them using Adobe Illustrator.

To do so, click the "File" menu in Adobe Illustrator, then click "Open" and choose the PDF file you want to import. Go to the "File" menu and click "Save" to save the file as an Adobe Illustrator .ai file. You can also use a third-party PDF to AI converter, such as the popular open-source vector graphics tool Inkscape, to open a PDF file and export it as an AI file. You can also convert other graphics formats, such as if you want to convert a PNG to an AI file, using Inkscape or Illustrator.

Keep in mind that you may not be able to fully edit the contents of the PDF as you like, especially if it contains fonts that you don't have on your computer.

There are other ways to edit a PDF file besides importing it into Adobe Illustrator or another vector graphics tool. You can edit it in Adobe Acrobat or another PDF editing tool, such as PDFElement.

Often, though, PDF files are created from other file formats, such as other graphics formats or document formats such as Microsoft Word, Adobe Photoshop or Microsoft Excel files. If that's the case, it's often easier to edit the original file and generate a new PDF than to edit the PDF directly. It also makes it easier to ensure you have the fonts and other settings correct, since they're based on what's used in the original program.

Most software on modern operating systems can create new PDF files through the "Save" or "Print" menus.

How to Convert PDF Files to Wordpad

Around The Home
Productivity
By: Amy Dombrower

How to Print a PDF With a Change of Font Color

How to Delete an Acrobat Signature

How to Convert Indesign to Microsoft Publisher

How to View XBRL