In the past, TV commercials didn't just burst onto the screen between shows – they could just about burst your eardrums, too. While modern Federal Communications Commission regulations force commercials to have the same average volume levels as any other type of programming, the bold, everything-up-front sound mixing featured by many commercials can still fill the room. When the commercials are too loud, fix the problem with your TV settings or get some help by investing in a new audio gadget. 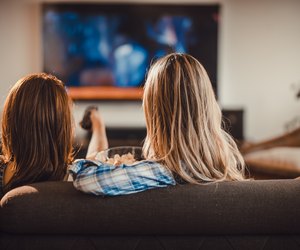 There's a good chance your TV hates inconsistent volume levels as much as you do. That's why many models across the spectrum of manufacturers feature built-in sound-leveling features to help them avoid annoying volume fluctuations.

Ensure that your smart TV's firmware is up-to-date and then check the sound or audio section in the TV's settings menu – this fix may be under advanced settings – and look for options such as "auto volume," "auto volume leveling," "volume stabilization" or "auto leveling." Enable the feature, and the TV automatically keep decibel levels consistent across content.

Use an External Mixer

Even if commercials are playing at the same decibel level as quiet drama, the drama's sound mix likely puts environmental sounds in the back and dialogue up front. A commercial, on the other hand, often mixes everything at the same level, making for a jarring, dissonant effect.

That's where TV sound regulators come in. When you connect one of these compact devices to your set-top box, gaming system, Blu-ray player or streaming box and back to your TV with an HDMI cable, it automatically mixes audio on the fly. Regulators often ease common TV sound issues such as annoyingly loud explosions and gunfire paired with bafflingly quiet dialogue that make you constantly reach for your remote. While TV sound regulators may affect the quality of the audio so drastically that it sounds louder overall, they make the sound consistent across various sources. That way, you only have to reach for the remote once.

When TV commercials are too loud, the law has your back. In December 2012, the FCC began enforcing the Commercial Advertisement Loudness Mitigation Act. Yes, it's the CALM act.

These rules require TV providers to measure and control the audio levels of programming including commercials, requiring ads to have the same average volume level as the accompanying programming.

The CALM Act does not set a hard cap on loudness, but not all hope is lost. If you feel that a specific commercial is too loud, the FCC encourages viewers to submit a complaint, which it will evaluate and potentially enforce. To blast a commercial the same way it blasted you, head over to consumercomplaints.fcc.gov.

How to Fix a Buzzing LCD TV

How to Fix the Sound on a RCA TV

Around The Home
Entertainment
By: Robert Vaux

How to Set the Sound Leveler on a Panasonic Plasma TV

Troubleshooting a Philips Television with No Sound

How to Fix Out of Sync Audio & Video on TV

How to Configure Sound in Vizio TVs