How to Make Any Outlet a Phone Jack

At one time, every home had at least one jack, often in each room. But in a cellphone era, landlines are becoming harder to find. Fortunately, you can turn an A/C outlet into a phone jack with minimal effort. You can easily convert an outlet into a telephone jack using a for-purchase phone jack, but you can also connect the wires inside the jack for a more permanent solution. 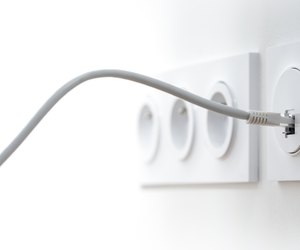 How to Make Any Outlet a Phone Jack
credit: olm26250/iStock/GettyImages

What Is a Phone Jack?

A phone jack is a wall outlet used for providing service to landline-based phones. The outlet is only the conduit. As with other services like Wi-Fi and electricity, you'll need a paid plan with a telephone service provider.

Phone jacks were once standard in homes and offices but increasingly, buildings are being established without them ever being installed. In older homes, residents are paying electricians to convert old landline outlets to electrical outlets, or removing them altogether. Fortunately, you can run a phone line through an electrical outlet, as long as you have the right tools.

One of the easiest ways to establish phone connectivity is by converting an electrical outlet to a landline. There are wireless telephone jacks available that you simply plug into any electrical outlet and, voilá! You'll be able to connect up a corded or cordless phone.

Running a phone line through an electrical outlet isn't without its complications, however. If any of your neighbors use a wireless phone jack, you may encounter interference. You'll also need to set up a security code specific to your own home's phones. If there's ever a power outage, these codes should still be in place once the power is restored, as long as it wasn't out for an extended period of time.

For DIY-ers, installing a telephone jack isn't too overly complicated. You'll first need to ensure you disconnect the line since incoming calls have enough power to produce a mild shock. You'll do this at the telephone interface box, typically mounted on the outside of your house.

In some households, old phone jacks seem to be everywhere. You can cover them with a plate, but wouldn't it be better to make them useful? One of the biggest benefits is to be able to charge your phone when your power goes out.

Just as you can run a phone line through an electrical outlet, you can also turn your phone line into a USB charging station. You won't get a large amount of power from an A/C outlet, but it should be enough to charge a cellphone.

To convert your phone line to USB, use the following steps.

Around The Home
Productivity
By: Katherine Kally

How to Make a Rotary Phone Work With Your Phone Jack

How to Reduce Line Attenuation For DSL

Around The Home
Productivity
By: Sarah Silverman

How to Splice a Telephone Wire

How to Wire a DSL Jack

Around The Home
Productivity
By: Michael Hintz