How to Move a Toolbar Back to the Bottom

By default, the Windows taskbar appears at the bottom of the screen both on your desktop and in all applications except when in full-screen mode, such as in a game or a Windows 8 app. If you don't have the bar locked, however, you can accidentally drag it to another side of the screen. To move it back to the bottom, you only need to unlock it and pull it to the desired location. 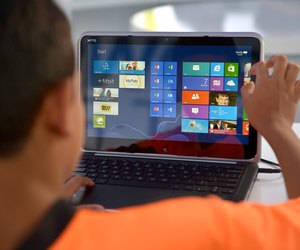 The taskbar does not appear in the Windows 8 modern interface.
credit: Charley Gallay/Getty Images Entertainment/Getty Images

Right-click an empty spot on the taskbar and uncheck "Lock the Taskbar" if a check appears by the option. Once unlocked, you can drag the taskbar to any side of your screen. You won't see it moving as you drag, but once you move your mouse near the bottom of the screen, the taskbar will appear back at the bottom. Let go of the mouse button to place it. If your taskbar appears taller than usual, click on its top border and drag downward to shrink it. After finishing, you may want to recheck "Lock the Taskbar" to keep it in place.

Even with the taskbar locked, you can drag icons on the bar to reposition them, both in the pinned applications area and in the notification area near the clock. For additional settings, right-click the taskbar and pick "Properties." In these settings, you can choose "Auto-Hide the Taskbar" to show the bar only when your mouse approaches it, or "Use Small Taskbar Buttons" ("Use Small Icons" on Windows 7) to shrink the bar's height and allow more icons to fit. You can also pick whether to combine windows from the same program into a single icon or separate them into individual buttons.

Information in this article applies to Windows 8, 8.1 and Windows 7. It may vary slightly or significantly with other versions and operating systems.

How to Rotate a Taskbar

How to Add Icons to a Taskbar

Around The Home
Productivity
By: WendyL

How to Exit Full Screen on Google Chrome

How to Change the Bottom Icons on an iPhone

Around The Home
Entertainment
By: Craig Witt

How to Restore the Volume Control to Your Windows System Tray