Computer technology rapidly changes from one year to the next. RAM speeds increase, memory capabilities go up, and processors become more powerful. Peripheral devices can often be overlooked, but many of them—such as the computer mouse—are changing rapidly as well. The wireless mouse has become one of the popular accessories on computers. Several different types of technologies make wireless mice possible. 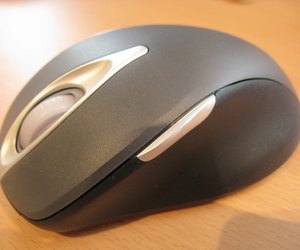 There are various types and features of wireless mice.

One of the oldest and most standard versions of wireless mouse is the optical mouse. Having been around for more than five years, the version has proven to be satisfactory, although other modern technologies are becoming widely available as well. The optical mouse functions via infrared technology. A bright red glow can be seen when turning the mouse upside down. This infrared sensor is responsible for transmitting the location of the mouse to the computer, eliminating the need for a cord.

RF frequency mice utilize RF signals to make them function correctly. An RF transmitter—located inside the mouse—is used to transmit signals that dictate the location of the mouse. An RF receiver is used to pick up the signals. The receiver device usually connects to the mouse input slot in the back of the hard drive. It then decodes the signal and communicates with the computer the location of the mouse nearly instantaneously as it moves around.

Similar to RF mice are Bluetooth mice. Bluetooth technology uses 2.4 gigahertz frequencies to connect not only mice, but also keyboards, PDAs, and some printers. The range is usually roughly to 33 feet. The mice operate via infrared signal, which is then sent to the Bluetooth and further relayed to the Bluetooth-enabled computer.

Almost any major port that transmits data has become a transmission point for a mouse signal, including the USB port. The USB mouse uses a device that plugs into the USB port. The mouse transmits a signal about its location to the USB device, which then decodes the signal for the computer to read.

How to Reset a Microsoft Mouse

Around The Home
Productivity
By: Stephanie Steensma

How to Connect a Logitech Cordless Mouse

Around The Home
Productivity
By: Lucosi Fuller

How to Connect a Wireless Optical Mouse

How to Reset a Logitech Wireless Mouse

How to Fix a Stuck Cursor