What Is TS Readnfo XviD?

If you discover a file on your computer with the words "TS Readnfo XviD" in its name, you are likely looking at a digital video of a movie that someone has bootlegged. Someone may have downloaded the TS Readnfo XviD video from an Internet site or with a file sharing application. It is possible that the video is still playing in movie theaters, and not yet available through such services as video-on-demand, let alone on DVDs or Blu-ray discs. 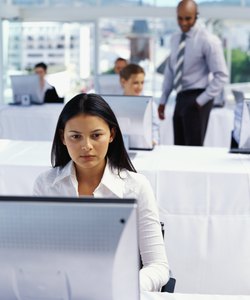 You can watch digital videos on your computer.
credit: George Doyle/Stockbyte/Getty Images

The letters "TS" when they appear in conjunction with video terms such as "XviD" stand for "telesync." When a bootlegger aims a portable video camera at the screen in a movie theater while a film is playing, she may be able to capture an adequate image. However, the recorded audio will probably be terrible, with the sounds of people eating popcorn and talking to their neighbors muffling the movie's dialog. The bootlegger will then obtain a clearer audio feed from another source, such as the projection booth in collusion with a theater worker, and then sync the better audio with the video shot with the handheld camera.

People who upload bootlegged videos such as ones with a file name including the terms "TS" and "XviD" will provide a text file that gives information about the technical nature of the video. The term "Readnfo" directs the downloader to read an included info file to learn about possible weaknesses or defects in the bootleg copy, to help her determine whether she should devote the time and effort to download it.

People compress large video files so they can more easily transfer them over the Internet, and so they will more easily fit on hard drives and CDs or DVDs. For example, someone could record a TS video in a theater, then upload the video file to a computer, and then compress it with the XviD format. An XviD video lasting about 90 minutes could then take up about 700 MB. You could fit one such XviD video on a data CD, or about six XviDs on a DVD data disc.

People who are impatient and cannot wait to see a movie in their home while it continues to play in theaters may resort to downloading a video file whose name contains "TS Readnfo XviD." Another group of people who might download such a video file are those who find themselves unwilling or unable to pay for an admission ticket. A TS XviD video may be the only way a person has to see a movie during its theatrical release period if she lives in a country other than where the film is being released, and if the film's distributors don't plan to show it in that part of the world. Depending on the laws in effect where you live, it could be illegal for you to upload or download a TS XviD video.

How to Rick Roll a Text Message

Around The Home
Entertainment
By: Katie McDaniel

How to Rotate a Video Clip in Windows Media Player

Here's How to Shoot 8mm Movies on Your iPhone

Around The Home
Entertainment
By: Missy Jess