8 Tech-Savvy Movies to Watch With Your Kids

If you're worried that your kids may try to imitate whatever they see on screen at the movies, maybe stay away from the Saw franchise. That said, plenty of movies offerbudding geeks a positive introduction to the wonderful world of technology. So next time family movie night comes up, consider picking up something with a tech twist that goes beyond cool special effects. Here are eight of our favorites. 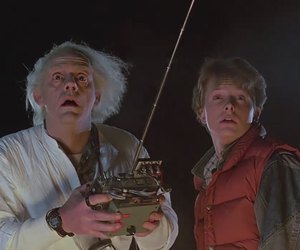 I took my son to see The Force Awakens (2015) before he had seen this one—and I found myself whispering all sorts of spoilers to him in the theater. The original 1977 Star Wars that launched the sci-fi franchise is a tech geek's dream, with creative characters and groundbreaking storytelling. Watching it is a great way to trigger interest in space exploration, robots, and futuristic gadgets. It may even spark a killer action figure collection! [Rated PG]

Back to the Future

There's a bit of foul language in the film (in the clip featured above, for example), but Back to the Future (from 1985) is a classic. It can be intense at times, of course, but that's how time travel is. All in all, this is the best family movie to expose kids to that idea. It's also an entertaining way to introduce concepts of physics, give kids a crash course in human history, and maybe even talk about the history of sci-fi. It doesn't hurt that Doc Brown (Christopher Lloyd) unveils several other interesting inventions throughout the movie. The 1989 sequel, Back to the Future II, is slightly more fun to watch,f rom the perspective of checking the accuracy of its predictions about the year 2015—but the original film is hard to beat for family movie night. [Rated PG]

Although not as entertaining as the original TRON, this 2010 sequel is a great film to enjoy with your favorite video-game geek. Technologically, it will probably be a lot more appealing, too, considering how lame the 1982 original looks now. Special effects have come a long way, but the story here is very similar to its predecessor. TRON: Legacy features the son of a famous game designer getting trapped inside a computer. The film is pure fantasy, with tons of eye candy sprinkled throughout—and that's okay. Another positive: You don't need to have seen the original film to enjoy this action-packed, high-tech movie. [Rated PG]

This 2007 Disney movie is another good way to introduce time travel to the wee ones. In fact, it's probably better for very young viewers who aren't quite ready for Back to the Future. Older kids should enjoy it, too. After all, Lewis, the 12-year-old main character, is a dreamer, an inventor, and an orphan seeking some answers. The animation in Meet the Robinsons isn't quite on a par with that of more recent films, but it has sci-fi themes and a lot of cool (and some not-so-cool) gadgets—and it should spark some thoughtful conversations about family, too. [Rated G]

Shall we play a game? If you can pry your kids away from their Xboxes and iPhones long enough, they should enjoy this very '80s thriller. Some kids may be a little turned off by the film's Cold War backdrop and old-school computer equipment (it was released in 1983). But Matthew Broderick's sympathetic character and some entertaining action make WarGames quite enjoyable. It's also an excellent way to introduce your kids to a little history, and to broach the subject of computer safety. [Rated PG]

As a tech movies to watch with your kids, Wall-E (2008) ranks with Star Wars. It's a touching film with gorgeous visuals—pretty much what you'd expect from Pixar, the studio responsible for Toy Story (1995) and Inside Out (2015). This one made our list because the main character is a robot. That should be enough, but Wall-E can (and should) also trigger discussions about relationships, the impact of technology on our day-to-day lives, and the deterioration of the environment. [Rated G]

In 1984, shortly after befriending E.T., Henry Thomas starred in this tale of family, espionage, and video games. Yes, the games are very old-school, but kids will be immersed in the story of an 11-year-old boy who gets tangled up with a bunch of hostile spies and one friendly (but imaginary) secret agent. Once the excitement is over (and there is plenty of that), you can use Cloak & Dagger as a springboard to talk to your kids about video games and the difference between make-believe and real-life situations. [Rated PG]

Houston, we have a problem—there's just too much to love about this movie. Based on the aborted 1970 Apollo 13 lunar mission, this 1995 film features thrilling situations, excellent acting, and lots of science. The movie also has a lot of cool space themes, gadgets, and gizmos. Apollo 13 even shows how scary space can be, how prepared NASA is to handle such situations, and how far a high-tech education can take you. [Rated PG]

Disney's Live-Action 'Lion King' Trailer Will Give You Chills