When your cellphone rings, chances are you check the number on the screen. But in some cases, that number may come through reading Restricted, which means the person on the other end likely dialed *67 to block the number from displaying. To call back a blocked number, you can input a three-digit code, but you can also use software to detect incoming phone numbers in the first place, letting you know whether to answer or not. 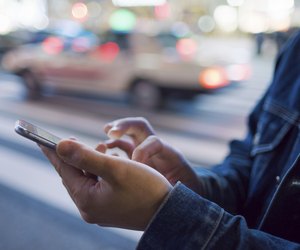 Ignoring calls from unknown numbers may work sometimes, but if you’re expecting an important call or you use your line for business, that isn’t always an option.
credit: Bronek Kaminski/DigitalVision/GettyImages

Whether you're getting restricted calls late at night or repeated calls throughout the day, blocked numbers can be a nuisance. Ignoring calls from unknown numbers may work sometimes, but if you're expecting an important call or you use your line for business, that isn't always an option. Fortunately, there are ways you can trace the call back to the original number, but there are limitations to this.

The easiest way to call a restricted number is to input a three-character code specific to the type of phone you're using. But that won't always work, so you may need to rely on third-party software to give you the number that is calling. You can also set up your phone to block incoming calls from unknown numbers, which will keep them from bothering you in the first place.

As clever as telemarketers think they are, they may not count on you using the oldest trick in the book. Last Call Return will call back the number of the last call that came into your phone, in some cases even giving you the number before calling. On a landline, you'll do this by dialing 69 as soon as possible, or #69 on a cellphone*. Unfortunately, this might not work with all carriers.

It's important to note that #69 can backfire on you, though. Some telemarketing software will see your callback as a verification that your number is active and use it to contact you more frequently. If you're getting quite a few restricted calls late at night, it may be worthwhile to block restricted calls altogether. This will keep them from coming through.

Software may be your best friend when it comes to tracking down callers. Third-party tools like Spyzie and True Caller ID & Dialer can give you information about incoming callers, although this information might not always be exact. You may only get the location of the caller, but that can be helpful if you're concerned about missing important calls by screening out unknown callers.

You may not need an anonymous call-tracing app, though. Increasingly, carriers are providing free tools that will help their customers identify spam calls. AT&T Call Protect includes enhanced caller ID, which offers details on unknown callers. While these services are newer and not perfect, they're likely to become better as time goes on.

Knowing who's calling is only helpful if you can do something about it. If you know the number, you can block future calls from it, but that won't help with unknown numbers. You can block restricted calls through the settings of your phone, which will ensure anyone who blocks their number can't get through, but this could cause you to miss important incoming calls.

If the problem is that you're getting restricted calls late at night, it may be better to use the Do Not Disturb feature of your phone. You can set specific hours, as well as make exceptions like allowing calls from everyone in your Favorites list. You can also allow repeat calls from the same number through, which will be beneficial if someone is urgently trying to reach you from an unfamiliar number.

How to Find Out a Private Number on a Landline

Around The Home
Productivity
By: Ireland Wolfe

How to Trace a Restricted Cell Phone Number

Around The Home
Entertainment
By: Stephanie Ellen

How to Identify the Number I'm Calling From

Around The Home
Productivity
By: ReneeG

How to Block My Number From Showing on Caller ID

Around The Home
Productivity
By: Brenton Shields

How to Hide Phone Numbers on a Cell Phone Bill

How to Reveal a Withheld Number