How to Use USB With Your iPad

If you don't think there's much you can do with an iPad's USB cable, aside from charging and syncing it with iTunes, you're mostly right -- that's basically why Apple made it. However, you may be surprised at what you can connect using a USB camera adapter. Designed to connect digital cameras to any iPad from the original to the iPad Air, USB camera adapters can also work with USB flash drives, keyboards, microphones and other devices. Before rushing out to buy a new accessory for your iPad, make sure you understand the iPad's limitations when it comes to USB. 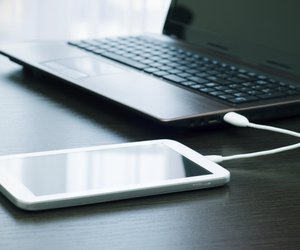 With a Lightning-to-USB camera adapter, you can upload photos from your digital camera directly to an iPad. The photos are saved in your iPad's Photo app. Some users have reported that the connector won't work until you turn off your camera's option to charge through USB. A separate Lightning-to-SD Card camera adapter works with your camera's SD card. For older first, second and third generation iPads with 30-pin connectors, you can connect a camera using Apple's iPad Camera Connection Kit, which comes with both a USB and SD card port.

In some cases, you can access a USB flash drive on an iPad by connecting to a Lightning-to-USB camera adapter. However, not all USB flash drives work, and you are limited to image and iPad-compatible video files. Christopher Breen, Senior Editor at Macworld, suggests using a low-capacity flash drive, like 64MB. Higher capacity flash drives require too much power to work with an iPad. Further, the flash drive must be formatted as a FAT volume. Create a new folder on the drive and name it "DCIM" and then put any files you want to access in that folder. When you connect the flash drive, iPhoto launches. Tap the "Import" button to import images and videos into iPhoto.

Before connecting any USB device to an iPad, it's important to remember that Apple recommends using the camera adapter to connect only cameras. That said, many people have found they can successfully connect USB keyboards, microphones and MIDI audio devices to the camera connector. Two factors are at play in these connections. First, the iPad has to natively recognize the device. Unlike PCs, there isn't an opportunity to install hardware drivers. Secondly, the device can't draw too much power from the iPad's battery. To eliminate the power drain on some USB keyboards, OS X Daily recommends plugging the camera connector and the keyboard into a powered USB port.

How to Connect Your iPad to Your Computer

Around The Home
Productivity
By: Aaron Wein

This Duo USB Adapter Is a Game Changer for Traveling

Does the iPad Have a Microphone?

How to Turn Your iPhone on When It Dies

How to Connect Your iPhone to External Speakers