Hewlett-Packard's Pavilion DV2500 laptop was originally designed and released in 2007 as a media laptop, delivering solid performance in a 14.1-inch package. With several build options available at purchase, the DV2500's exact specifications varied somewhat from one device to the next. For its time, the base build was a reliable multimedia platform with potential for upgrades and a few interesting additional features. 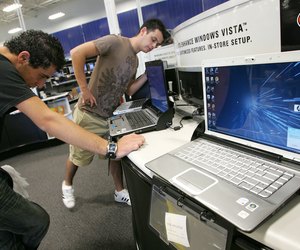 The base model for the DV2500 is equipped with an Intel Core 2 Duo processor, running at 2 GHz with a 4MB L2 memory cache. RAM memory was offered in several tiers, starting at 1GB and ending in 4GB of DDR2 RAM. Builds with a lower RAM module could be upgraded to the 4GB RAM limit, making it possible to expand the DV2500's capability. All models were equipped with an NVIDIA GeForce 8400M GS video card.

The HP DV2500 was offered with SATA hard disks in five capacity options: 80GB, 120GB, 160GB, 200GB and 250GB. It was offered with two optical drive options, a DVD-RW/DVD+RW and CD-RW double-layer combo drive burner and an HD-DVD, DVD-RW/DVD+RW and CD-RW combo drive burner. The HD-DVD drive can only read HD-DVDs and doesn't write to them. Base models included Bluetooth wireless and an 802.11a/b/g/n wireless card, as well as the option to install a WWAN card supported by Verizon BroadbandAccess.

The display on the HP DV2500 measures 14.1 inches diagonally and uses edge-lit WXGA technology to achieve a widescreen aspect ratio. Its native resolution is 1,280 pixels wide by 800 pixels tall, giving it an aspect ratio of 16:10. It can display up to 16.8 million colors when this color mode is enabled and has a contrast ratio of 250:1. Because its resolution doesn't measure at least 1,920 pixels wide by 1,080 pixels tall, the DV2500's display doesn't fall into the range of full HD, instead rating at roughly 720p or HD-Ready.

Around The Home
Productivity
By: Bruno Fuerte

Around The Home
Productivity
By: Chris Hamilton

The Specifications of a Gateway MA7 Computer

Around The Home
Productivity
By: Gary Fish