A radio controlled wall clock or "atomic clock" contains an atomic oscillator, a radio, and an antenna that enable the clock to be regularly synchronized with a true atomic clock. In North America, your clock is synchronized with the atomic clock at the National Institute of Standards and Technology in Boulder, Colorado. When you first turn on your clock, it takes a minute or two to detect and translate the signal; then it automatically sets the time in coordination with the Boulder clock. If the time is not being kept accurately, you can try several approaches to correcting the problem. 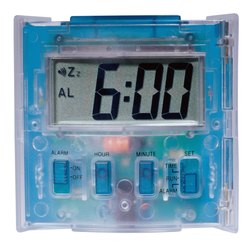 Confirm the correct time according to the NIST atomic clock by checking their website. You can also call (303) 499-7111. When you call, you may hear a series of clicks or beeps before a voice states that an upcoming tone marks a certain number of minutes after the hour according to "coordinated universal time." You should be able to hear that minute-marking tone at least twice before the call is disconnected.

Off by an hour or two

Many but not all radio controlled wall clocks adjust automatically to daylight savings time. If your clock is incorrect by one or more hours (but telling the correct minutes and seconds), and the clock's failure to "spring forward" or "fall back" by an hour is not an issue, most likely the time-zone setting is askew. Check the clock's instructions to see how to adjust that setting. The WeatherShack site warns: "Some atomic digital clocks only allow the selection of four different time zones (Pacific, Mountain, Central, and Eastern). Other atomic wall clocks may allow the selection of any time zone, even time zones that are outside the WWVB coverage area." So check the clock's capacity before purchase.

Off by minutes or seconds

If your clock's time is deviating more and more from NIST's official time, it may not be receiving the synchronizing signal at all. In many radio-controlled wall clocks, a displayed icon indicates whether the signal is being received. The clock may also have a button that allows you to hear a series of audio markers (beeps or tones) indicating proper receipt of the signal. If the signal is not being picked up, try "rebooting" the clock by letting it power down fully, unplugging it from the wall or taking out the batteries. Then power the clock up again and see whether it now synchronizes. If run-down batteries might be the culprit, test whether they're functional on another appliance, or just insert new batteries.

Other possibilities: Move the clock to a wall perpendicular to the wall that was its original location. This repositioning might improve the antenna's directional ability to pick up the signal. If the clock is near your PC, interference from a computer monitor might be the problem; so move your radio-controlled wall clock to a position between four and eight feet away from any such monitor. If the clock is inside a building with metal walls or siding, like a motor home, metal may be interfering with the signal. Power down the unit, take it outside, power it up again and see whether it now detects the signal.

How to Change the Time Zone on an Oregon Scientific Clock

Around The Home
Productivity
By: David Ferris

How to Set a Timex Alarm

Around The Home
Entertainment
By: Jeffrey Brian Airman

Around The Home
Entertainment
By: demand1181

Around The Home
Entertainment
By: Nina Nixon

Around The Home
Entertainment
By: Samantha Volz

How to Set the Time on a Samsung 42-Inch HDTV

Around The Home
Entertainment
By: Bobbye Alley