The History of the Webcam

A webcam is an input device that allows computer-users to share what they record with viewers who are connected to the Internet. While people commonly use webcams for person-to-person communication, the inventors of the webcam did not originally design the device for this purpose. Its inventors were not trying to revolutionize the way we communicate; they were trying to save themselves unnecessary walks to the coffee pot. 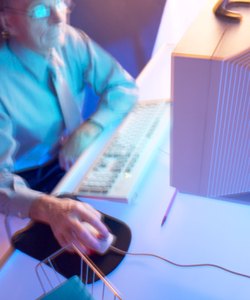 Computer-users commonly mount webcams to the tops of monitors.

In 1993, the Cambridge University researchers in the Computer Science Department took their remote coffee pot-viewing experiment a step further by updating the images of the digital camera in the Trojan Room to the Internet. In the process, the researchers created the world's first webcam. The researchers accomplished this feat by developing a remote procedure call mechanism known as MSRPC2. The mechanism operated over the multi-service network layer protocol, which was a network protocol that researchers had designed for use with ATM machines. Using the MSRPC2 mechanism in conjunction with a computer's video capture board allowed the Cambridge University researchers to upload one frame per second from their coffee pot camera on to the web.

While researchers at Cambridge University invented the webcam, they did not design and sell webcams for widespread use amongst consumers. The now-defunct Connectix Corporation has the distinction of being the first organization to produce commercially available webcams. In 1994, Connectix released the very first commercial webcam, the QuickCam, which sold for $99. The QuickCam had a maximum recording resolution of 320 horizontal lines of pixels by 240 vertical lines of pixels; it could display 16 shades of gray.

The webcam did not come into widespread use until the 2000s. As "PC World" points out, by 2003, Apple, Microsoft and Logitech were designing and selling webcams. The demand for the webcams rose rapidly due to the development of video calling, which all of the major instant-messaging service providers began offering in 2003. As of 2011, people commonly use webcams for real-time, face-to-face communication. One of the most recent webcam innovations has been the incorporation of webcams into mobile devices, such as smart phones.

How to Use the Camera on the Acer Aspire One

Around The Home
Productivity
By: Faizah Imani

How to Get My Webcam Not to Be Blurry

Around The Home
Productivity
By: Alice Godfrey

How to Turn on the Webcam on a Dell Inspiron

Around The Home
Entertainment
By: DanH

How to Test My Webcam

Around The Home
Productivity
By: Lita McLeary