Microsoft Internet Explorer 9 may display the error message "There was an internal error, and Internet Explorer is unable to print this document" error message if the browser can't communicate with the printer. This error is caused by issues with drivers and incorrect settings and most frequently occurs with certain Canon printers. Microsoft provides a system update to solve connection problems to maximize printing. 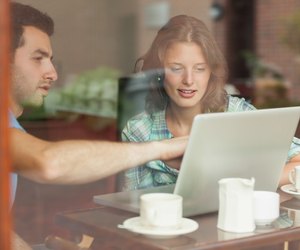 According to Microsoft, the error message reading "There was an internal error, and Internet Explorer is unable to print this document" is primarily caused by some Canon printer drivers. Some of the printers affected by this problem include imageRunner, imageGlass, Satera, LaserShot, and imagePrograf. The problem may also occur with non-Canon printers using a PostScript printer driver or if the Encapsulated PostScript is selected in the printer-name properties dialog box.

To solve this problem, Microsoft provides an update for 32- and 64-bit operating systems. The KB2522422 hotfix, which is available directly from Microsoft's website, installs components to improve compatibility between Internet Explorer 9 and printers. After you download and apply the update, you must restart your computer for the changes to take effect. Once it is installed, you don't have to modify the registry because the update installs components automatically.

If you're using a printer other than Canon and experiencing the same error, clear the Encapsulated PostScript output in the printer name properties dialog box. In addition, open the printer's tool in the Control Panel and disable automatic headers and footers.

Updating your Canon printer drivers to the latest versions decreases the chances of additional communication and printing problems. Microsoft says the problem also occurs when the printer is configured to print multiple pages on one sheet of paper. If you're printer's settings are improperly configured, readjust them to avoid running into printing problems.

What Is a Print Spooler?

How to Reset HP 74 Ink Cartridges

Around The Home
Productivity
By: Kat Walcott

How to Fix PCL XL Error

How to Fix HP Printer Errors

How to Find a Printer's MAC Address