9 Things About The Sims Your Kids Just Won't Understand 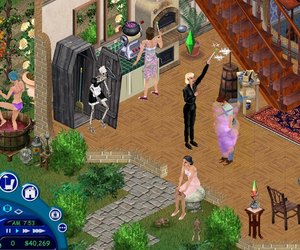 The Sims debuted way back in 2000. And while there had been life simulation games before then (like SimCity, SimAnt, and even SimLife), none caught on as well as The Sims did. In fact, the franchise--which consists of four standalone games and numerous expansion packs--is the best-selling PC franchise of all time.

And while The Sims 4 is the current state of the art in the Sims universe, a long line of older titles has, of course, scored many fans. As for myself, I was a grownup when I first found The Sims and quickly became addicted to the family building, architecture designing, and open-ended gameplay. While I enjoyed The Sims 2 and even still play The Sims 3 on the regular, there are a few things that modern-day players may never be able to understand (or appreciate) about the original first-generation game.

1. Only opposite sex couples could get married and have kids

When it first started, The Sims had more or less the same ethical guidelines as your great grandfather. In fact, The Sims didn't get progressive until The Sims 2, and even then same-sex marriages were called a "Joined Union."

2. Proposals ended with an instant wedding

Forget complicated and expensive wedding parties. If your opposite sex partner was up for it, you would both change into your fancy wedding clothes and get married on the spot.

Some might say that's the way we should do things in real life. This is for sure: It would save a ton of money on wedding planners.

3. You got a baby in The Sims by smooching. Lots of it.

While Sims can also have a baby by "playing in a bed" (specifically, a Vibromatic Heart Bed), it's easiest to just kiss the heck out of your opposite sex partner. A notification will spring up asking if you should have a baby, to which you can select "Yes" or "No." There is no pregnancy! No morning sickness! Hooray!

4. There are no genetics

Once the baby grows up, it becomes readily apparent that there are no genetics. Kids are randomly put together like biological Legos, so forget about any hope that your beautiful blonde blonde locks will be passed down to your digital kin.

Prefer not to go through the toddler stage in your virtual world? Boot up The Sims. Kids go from Baby to Child automatically, no awkward toddler age stage needed.

Come to think of it, there's something amiss here with the whole kid thing. Along with the fact that kids are randomly spliced together and spring forth instantly from babies, they also never grow up past the child stage (unless, of course, you have the Makin' Magic expansion pack and use a certain charm).

7. The soundtrack for The Sims was super groovy

If you've ever played The Sims, watch this video. You'll be instantly transported back to a simpler time.

Even better, if you've never played the original version of The Sims, prepare for a groovy time. For best results, put this on your phone and listen to it all day long, as your personal soundtrack to life.

8. Simlish has a long history

If you have played any Sims game at all, you'll notice that they don't speak in an actual language—instead, they speak in Simlish.

And if you've been playing the game for 16 years or so, you're probably pretty dang good at speaking it. Drop some Simlish on your youngsters and watch their eyebrows go up.

Oh, and here's a bonus video: This is what it looks like when voice actors record Simlish in the studio:

9. Your Sim can die of guinea pig disease

This is a fatal illness that Sims can only acquire in the first Sims title, and only if you had the Livin' Large expansion pack installed. Yes, it's weird.

And I love how her partner just eats his food and goes on about his day as she croaks on the floor.

Digital Parenting: Is It Tougher When You're Older?

Here's Everything Coming to Netflix in August 2018

Halloween Costumes for Kids You Can Buy on Amazon Right Now

Where Can I Find the Wedding Arch in "Sims 3"?

Around The Home
Productivity
By: C.A. Rubino