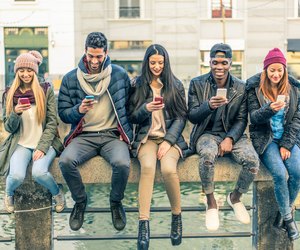 The ability to communicate wirelessly and across borders is one of the biggest uses of mobile phones. Mobile phones have emerged as the primary communication devices for millions of rural, remote and underdeveloped areas in developing countries where it is difficult to build extensive fixed-line and other wired phone infrastructures. Mobile phones can be used in many emergency situations and exigencies to gain valuable and timely help.

Cameras loaded on most mobile phones can be used to take pictures of women and unsuspecting children; these photos are then generally morphed, manipulated and circulated on the Internet. Texting can also be used to abuse or stalk people.

Mobile phones have been known to be used by unscrupulous elements, thieves and criminals to carry out a number of criminal schemes, scamming programs and other illicit activities. What Are the Benefits of Computers in Society?

Around The Home
Productivity
By: Pallab Dutta

How to Resize Scanned Pictures

The Advantages of Mobile Phones to Society

Around The Home
Entertainment
By: Kasey Jones